Another Davison Invention Launched on QVC! 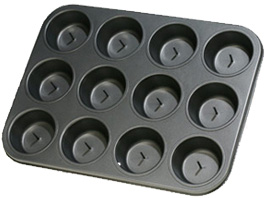 The Surprise Filled Dessert Pan made its marketplace debut this Sunday during “Cooking on Q Day,” QVC’s big event for hot new kitchen products! The product was featured in the popular “Cooking with David” segment from 12 -4 p.m. EST. Like many other new kitchen products created by Davison, the innovative bakeware got a lot of attention. The product sold more than 3,000 units in the first few minutes! 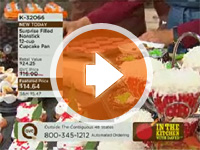 The new pan has posts in the bottom of each tin, so treats can be baked inside cupcakes and muffins, adding a burst of flavor. The idea originated during a brainstorming session with the corporation, which is now producing an entire line of pans based on the treat-filled concept. Among the possible spin-offs in the works are a jumbo cupcake pan and mini muffin pan. The product also will be shown at the 2011 International Housewares Show in March.

“It’s remarkable — here is another idea that will cause a lot of excitement in the cooking industry,” said George Davison, founder and CEO.

“Just when you thought a baking pan could never be innovated, our team reshapes an industry with innovation once again. I’m very proud of our entire team for bringing excitement to bakers everywhere.” 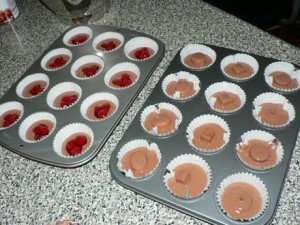 Surprisingly, the inspiration that led to the idea for the pan originated with the old flexible Gumby toys, which were manufactured by pouring the rubber around a post. “This is another example of twisting an old manufacturing technique into a totally different industry to breathe new innovation into it,” said the VP of Design. The design engineer tested the sample and made cup cakes with various fillings. As shown in the photos, he got delicious results. 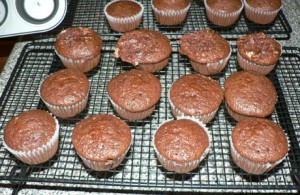 Mr. Davison knew who the first customer would be — “I think my mom and her ‘grandma girlfriends’ were the first ones buying pans to make surprise filled cupcakes for their grandchildren! Moms and grandmas everywhere will be able to delight their loved ones with cupcakes with candy surprises inside.”