Where do some inventors get the inspiration they need in order to revolutionize a product? The simple answer would be nature. Nature has solved most of the problems we face with evolution over the years. While most products change many times between concept and production, occasionally a product makes it all the way to market before it’s changed, looking nothing like the original product. These are just a few examples of how some items we now know and love had a bit of a rocky (and sometimes dangerous) start.

You’ve probably seen a photo like the one above depicting a toddler sitting in a cage hanging from a window. This cage is attached to an apartment window in the city, with only a few wires and handles keeping the cage secure. Baby cages were a way to give babies fresh air in the city without making parents (gasp!) take their kids outside. Eventually, however, safety concerns caused the baby cage to lose popularity. The concept was retooled to use wood instead of metal, have a soft floor, and (thankfully) only be used on the ground. These versions are still in use today, now called playpens.

As long as there’s been fire, there have been people cooking over it. Toasting items over flames has remained a popular pastime–if the enduring legacy of toast is anything to go by. Originally, toast was made by placing bread on long forks and holding it over an open flame or grill. The first electric toaster would place the bread against a heating mechanism on one side, requiring the cook to manually turn it once it reached the desired doneness. It wasn’t until the early 20th century that a toaster was developed that toasted both sides of the bread at the same time. 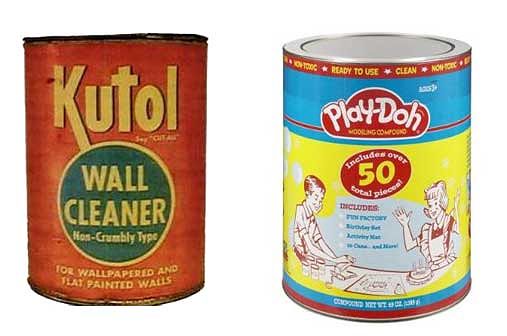 The popular molding dough for kids was originally marketed with the slogan “Good, Clean Fun!” This is no accident. Play-Doh began life as Kutol Products’ wallpaper cleaner: a mixture of water, salt, and flour. Cleo and Noah McVicker first introduced the cleaner in 1933 and Cleo’s son Joseph saw how students were using the compound as modeling clay in 1955. The following year, Rainbow Crafts (a subsidiary of Kutol) was established with their trademark product, Play-Doh.

Imagine a vacuum so large it required a horse-drawn wagon to move. This was the reality with the 19th century’s first “portable” vacuum. Unlike its predecessors, which were powered by hand, this behemoth used a motor and gasoline. A truly portable vacuum was introduced in the 20th century, once again powered by hand. These units were soon electrified by James Spangler, with disposable filter bags following in time. Bags and the traditional upright, cylindrical design wouldn’t last long, however. Now we don’t even need to manually operate our vacuums. The Roomba can find the mess and clean it up without human interaction–until it’s time to empty it.

A favorite of college kids and beach-going families alike, the Frisbee wasn’t always the flying disc we use each summer. The disc itself was invented in 1871 by William Frisbie, owner of the Frisbie Pie Company. Students at the university nearby would throw the empty pie tins, yelling “Frisbie!” to warn others to catch it. Wham-O, the same company behind the Hula Hoop, later rebranded their existing Flying Saucer toy to “Frisbee,” an homage (albeit misspelled) of the pie company’s name.

CURIOUS ABOUT WHO YOU ARE?

Now that you have seen how inventions have evolved, don’t you think it’s time to leave your impact? Never stop being innovative. Take our inventor quiz to see what kind of inventor you are! Click here to take the test!