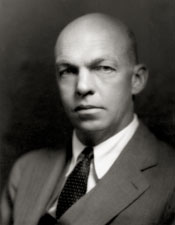 On December 12, we wrote a blog about the first trans-Atlantic radio transmission that was sent by Guglielmo Marconi. Well, at that time, Edwin Armstrong was only 11 years old and the idea of frequency modulation had not yet come to be.

Edwin Armstrong is considered to be one of the great engineers of the 20th century and was born in New York City in 1890. At a young age, Armstrong became extremely interested in studying radio and building homemade wireless equipment.

Most inventors are always looking for a solution to a problem. The problem at hand for Armstrong was that a device did not exist that could amplify weak signals at the receiving end of a communications transmission. Additionally, there wasn’t a way to provide stronger power at the sending end.

So, Armstrong spent his time finding a solution to the problem as he pursued his wireless studies further at Columbia University’s school of engineering. 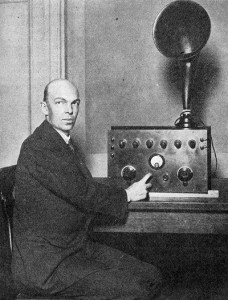 After three years at Columbia, Armstrong created his first major invention, the first radio amplifier. He had discovered how Lee DeForest’s radio tube worked and he then redesigned that invention by taking the electromagnetic waves that came from a radio transmission and repeatedly fed the signal back through the tube. Each time Armstrong did this, the signal power would increase as much as 20,000 times a second! This process became known as “regeneration” and proved to be a very important discovery in the early days of radio.

With Armstrong’s first invention, radio engineers no longer needed 20-ton generators to get their stations on the air. Rather, his single-circuit design offered the key to the continuous-wave transmitter that is at the core of our radio operations today.  In 1914, he patented his invention and licensed it to the Marconi Corporation.

As time went on, Armstrong was sent to Paris to serve in World War I and this is where he created his second major invention, the superheterodyne receiver (now, that’s a mouthful!) This invention was spun out of a project that he was assigned to, in order to find a ‘Better Way’ to improve the ability to intercept shortwave enemy communication. In 1920, Westinghouse bought his patent for the receiver and started up the nation’s first radio station, KDKA, in Davison’s home city of Pittsburgh, Pennsylvania!

However, Armstrong is best known for his idea and invention of frequency-modulated or FM radio in 1933. His invention of wide-band frequency modulations, or FM, improved the audio signals of radio by controlling the noise static that was caused by electrical equipment and, naturally, by the earth’s atmosphere. To take his invention further, Armstrong received U.S. Patent 1,342,885 for a ‘Method of Receiving High-Frequency Oscillations Radio’ for his FM technology.  This new invention allowed a single carrier wave to transmit two radio programs at once, otherwise known as “multiplexing.”

In 1940, he received a permit for the first FM station that was established in Alpine, New Jersey. By the late 1960s, FM was known as the superior radio system and, now, is even used in earth-to-space communication.

To this day, every radio or television uses one or more of the inventions that were created by Edwin Armstrong, otherwise known as the “father of FM radio!”