Can You Hear Me Now? Good! 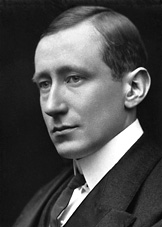 Marconi was half Italian and half Irish and was born in Italy in1874. As a student, he took an extreme interest in the field of physics. The path of his schooling ultimately led to his study of radio waves, after he had observed the experiments of a German scientist by the name of Heinrich Hertz. Marconi then began to improve upon Hertz’s work in Bologna, Italy.

After some trial and error, Marconi succeeded in sending a radio signal over a short distance of one and a half miles. Although this was an achievement in itself, Marconi didn’t receive a lot of encouragement to keep pursuing this idea of radio signals. So, he made the move from the country of his birth to England in 1896.

It was in England that he started his own wireless telegraph company, where he could continue to put his theories into practice. Additionally, he made another step in the right direction by sending transmissions more than 10 miles at a time. Pretty soon, these small steps turned into big steps when he sent the first transmission across the English Channel in 1899; and, by 1900, he had patented his invention.

But, perhaps his greatest achievement came on this day in 1901 when Marconi sent the first radio signals across the Atlantic Ocean. Many people had their reservations and speculations that the radio waves would be lost as the Earth curved over that distance. So, Marconi took those speculations into consideration and created a specifically designed wireless receiver in Newfoundland, Canada, by using a glass tube that was filled with iron filings, otherwise known as a coherer, to conduct the radio waves. From there, he used balloons to lift the antenna as high as possible.

That setup sounds like something out of MacGyver; however, this system was at the time, an innovative way to transmit the radio waves long distances.

This transatlantic transmission won him worldwide fame; however, the critics of the project were correct when they declared that the radio waves wouldn’t follow the curvature of the Earth, as Marconi believed. In fact, his transatlantic radio signal was headed into space when it was reflected off of the ionosphere and bounced back toward Canada.

At that point in time, there was still a lot to be learned about the laws of the radio wave and the role that the atmosphere played in radio transmissions. But, Marconi continued to spearhead efforts in radio discoveries and innovations over the next three decades.

So, on this day, 112 years ago, although a very primitive invention was used by Marconi in order to transmit the first message across the Atlantic Ocean, we can say that the world of human communication was forever revolutionized.