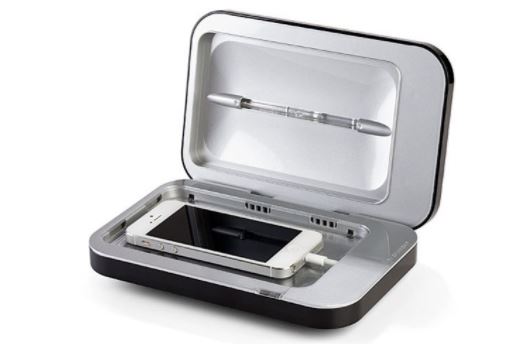 In today’s world, our cell phones are a major part of our everyday lives. We use them from the minute we wake up, until right before we’re about to go to sleep…sometimes we’re even on them while we eat.

Two inventors, Dan Barnes and Wes LaPorte, were watching a television report one day when they discovered something unsettling. The report stated that our cell phones are contaminated with countless germs and even fecal matter.

Disgusted yet skeptical by the report, Barnes and LaPorte headed to a local lab so that they could have their phones tested and see just how accurate these claims were. To their surprise, the report was not far off. Their test results proved that the average cell phone is 18 times dirtier than a public restroom.

Faced with a challenge, the two inventors got to work, trying to create something that would offer a safe way of sanitizing a phone without taking away from our screen time.

After conducting some research, the two realized that the solution they were in search of was the same technology hospitals use to disinfect and sanitize their surgical equipment.

With a main goal of making peoples everyday lives healthier, PhoneSoap went into production. To date, the duo has sold more than 100,000 units.

Similar to a tanning bed, PhoneSoap encompasses your phone while subjecting it to UV-C light for a ten minute period, not a bad trade-off for a germ-free phone.

By identifying a problem that many people face and creating an economical and time-efficient method of sanitizing, Barnes and LaPorte were able to invent a cost-effective solution to a wide-spread problem.

Sometimes, people may not realize a problem that they face every day. That’s why, as inventors, we constantly search for ways to make life better.

*Davison had no involvement with the design or creation of the featured product. *