What do Lucky Strike, Coca-Cola and Air Force One have in common? If you guessed Raymond Loewy, otherwise known as the “man who designed everything,” you are correct!

It’s an amazing feat to think that one man could be responsible for so many iconic products that essentially shaped Americana, but Raymond Loewy was, in fact, the creative mind behind these product logos

Let’s take a drive down memory lane in our classic Studebaker Avanti, while smoking a Lucky Strike and sipping an ice-cold Coca-Cola. Also, picture Air Force One zooming over our heads before we stop for gas at the Exxon station as we discover some of the amazing products that Raymond Loewy had his creative hand in. 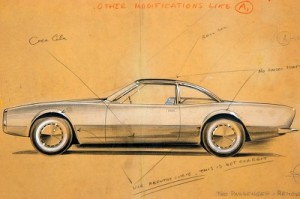 Studebaker Avanti- This was very much a hands-on experience for Loewy and his team of young designers that were led by John Ebstein. Loewy and his design team created famed designs such as the Starlight in the 1950s and the classic 1963 Avanti that was designed in a very short time. Additionally, Loewy redesigned the Studebaker car company’s logo. 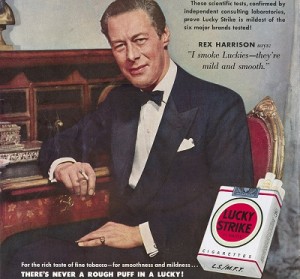 Lucky Strike Cigarettes- So simple, yet so iconic; a pack of Lucky Strike cigarettes is recognizable around the world. Loewy was involved in the process of changing the original tobacco green background color to white and making the bulls-eye logo stand out. Despite a few iterations over the years, the logo has remained faithful to Loewy’s original, yet basic, design. 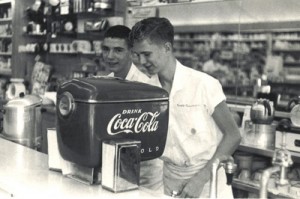 Coca-Cola- Loewy had a large partnership with Coca-Cola and was responsible for an important redesign of the iconic glass bottle. However, his most unique work was when he designed vending, soda and ice dispensing machines for the company. 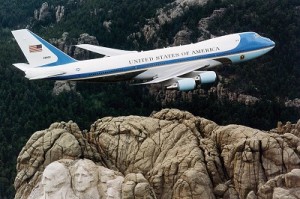 Air Force One- Any time that the president and his entourage have to travel great distances, they board the presidential plane: the Air Force One. That plane’s shell is Loewy-designed. The two harmonizing tones of blue and the Caslon typeface have withstood the test of time and have remained the same since the original design was constructed for President Kennedy in the 1960s. 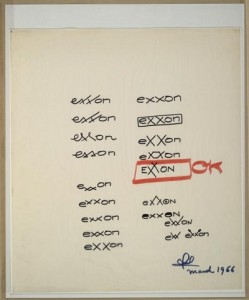 Exxon- As you can see from the picture above, after several of his attempts to create the Exxon symbol, Loewy’s sketches eventually hit their mark with the creation of the logo with interlinked X’s that remains today.

These are only a few of the iconic brand logos that Loewy created in his illustriously successful career. However, it is safe to say that some of the most recognizable and long-standing brands were designed at the hand of the creative-genius, Raymond Loewy.