Tired of Driving? Just Google It

You’ve relied on Google for years. You need to send your friend directions to your party. Google Maps and Gmail. You need to know the full cast of the Nick Nolte vehicle “Blue Chips.” Google search. You need someone to drive your car while you eat leftover P.F. Chang’s. Google drive?

Yes. Google, who has already tested driverless cars in Nevada, has been developing self-driving cars for a while now and has successfully lobbied for legislative support in California. According to Android Authority, “A bill to allow computer-controlled cars on Californian highways passed 37-0 in the Senate and 74-2 in the Assembly and is now awaiting action by Governor Jerry Brown.” 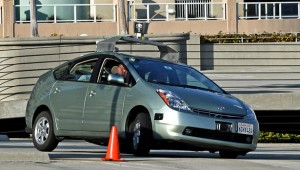 “The bill will allow companies to test out driverless cars on public roads. The DMV still has to draft rules and will apparently designate the person in the driver’s seat or the person who engages the technology as the ‘operator,’ presumably for legal reasons.”

Google cars use a combination of video cameras, radar and lasers to drive in traffic, and Google says it has driven them over 300,000 miles without an accident so far.

“California is almost perfect for the introduction of autonomous cars. It is large and diverse enough to allow testing in almost all environments. There are regions with almost optimal weather conditions such as Southern California (snow being very unlikely except in the mountains). This is where Google could launch their first commercial trials for car-sharing, taxi or truck/logistics services,” reports Driverless car market watch.