This Invention is Adding the “O” to H2O

The earth is comprised of 70 percent water; yet, people everywhere all over the world struggle to find clean water.

As you can see, finding a clean water source is a large problem for many people. But, an Israeli company believes that they might have found a solution to the problem by producing drinking water from the air that we breathe. 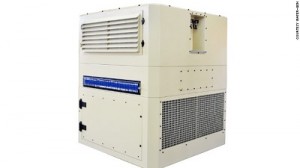 Water-Gen has invented an Atmospheric Water-Generation Unit by using its “GENius” heat exchanger to chill the air and condense it into water vapor.

The process begins when the clean air enters the GENius heat exchanger system, where it is first dehumidified. The water is then removed from the air and is stored in a collection tank inside the unit. Once the air is in the tank, the water is then passed through an extensive water filtration system, which cleans it from possible chemical and microbiological contaminations. Finally, the clean, purified water is then stored in an internal water tank that keeps it continuously preserved, in order to keep it at high quality over time.

The generator-powered invention can produce up to 450 gallons of clean water a day for as little as eight cents a gallon, which is perfect for those areas in the world that feel the immense burden of economic distress.

Additionally, Water-Gen has already sold units to militaries in several countries. Due to the fact that troops can’t always transport their own water, they can now transport a water maker, thanks to this invention.

Often times, soldiers get their water from the tap or from water tankers. However, soldiers can get disconnected from their organic units. Even though there are water sources in the field, the soldiers don’t know the quality and don’t want to expose themselves to contaminated water.

While capturing atmospheric humidity itself isn’t an earth-shattering invention, Water-Gen has said that its water generation is more energy efficient than other generators out there, because it uses the cooled air that was created by the unit to chill incoming air.

Despite the fact that the Water-Gen’s developments aren’t a solution for the water crisis just yet, the innovation can help not only soldiers but also countries that lack clean water, such as Haiti. This innovative invention goes beyond just being used to filter water, it also can save lives.