In August, we talked about how big name apparel companies are using the up and coming technology of 3D printing to create special shoes and clothing for professional athletes. Well, 3D printing has been used for countless other products as well. 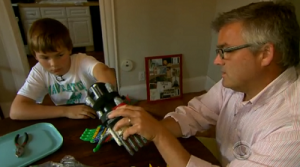 In addition to 3D printing, last week we spoke about prototypes and how they too, come in all shapes and sizes and this prototype of a homemade prosthetic hand, in particular, comes with a great story.

It all began with a young boy who had a birth defect, a father on a mission to help his son and a 3D printer.

Leon McCarthy was born without fingers on his left hand, which left him unable to do everyday tasks. That was until Leon’s father, Paul McCarthy, did some research on his own to help his son lead a “normal” life.

Rather than pay tens of thousands of dollars for a factory-manufactured prosthetic, McCarthy printed one. That’s right! Paul McCarthy used a 3D printer to create a prosthetic hand for his son. The inspiration for this prototype stemmed from a YouTube video that McCarthy found online that detailed the work of Ivan Owen, who printed a prosthetic hand for a 5-year-old in 2011.

With a 3D printer that was purchased for his son’s school and the guidance from Owen’s online directions on how to assemble this prototype, McCarthy finally created a hand that Leon was able to test.

Now, Leon proudly calls himself a cyborg, or a person whose physiological functioning is aided by or dependent upon a mechanical or electronic device. With the help of his dad’s creation, Leon is now able to draw, pick up food and hold a water bottle, among other tasks that he was unable to do before his dad created this homemade prosthetic.

With the hand that his dad made him with a 3D printer, Leon has said that he now feels “special,” rather than “different.” It truly is inspiring to see what determination and new technology can do for those in need.