Listening to Music in Your Car? – What a Great Idea!

We’ve been listening to music in our cars for over 80 years; from the early days of simple AM radio to today’s high-end digital audio setups.  And, our sources have gotten pretty sophisticated as well.  We used to get our radio signals from giant antennae on the ground.  Now we have satellites beaming radio signals to us from space, and streaming radio in the form of WiFi. So for us, it seems like a no-brainer that the car and the radio would have been together from the very beginning, especially in the US, where it’s hard to imagine long drives without music or talk radio to keep us company.

But, believe it or not, there was a period of thirty or more years where cars existed without radios!

Cars have been around since the late 1800s, even earlier if you count steam-powered automobiles.  And radios have been broadcasting since before the beginning of the 20th century.  So how and when did these two wonderful inventions meet? 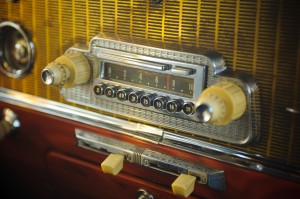 Well, one story goes that on a cool summer evening in the 1920’s, two young couples who were double dating parked up on a lookout under the moonlight and started to get romantic, when one of the young ladies said that the night would be even better if they could listen to some music in the car.  That got the young men thinking – both were tinkerers and part-time inventors – and it wasn’t long before they were taking apart a home radio and trying to get it to work in a car.

But they ran into a few problems because having a radio in a car is a lot different than having a radio in the home.  Cars have a lot of electrical connections and circuits that generate electrical interference with the radio, and that causes a lot of static.  So, it wasn’t going to be as simple as just plopping a home radio into the car and riding off.  But the two inventors were very resourceful, and they systematically identified and eliminated each one of the offending sources of static. And it worked.  They had removed the static problem, so that the sound coming out of the radio was pretty clear.

Now, they faced another problem: how to integrate the radio into the car itself.  People couldn’t drive around with a big wooden box radio in their backseat, so how could you fit a radio into a car?  Well, as it turned out, the best answer was to split the radio up into several units. The receiver was mounted on the engine wall with wires from a control panel that was put on the steering column.  The speaker was also placed in a box and mounted into the dashboard. 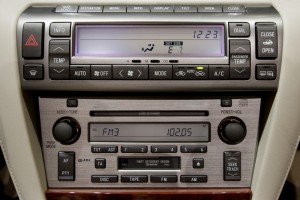 Then, there was a problem with power.  Radios used a lot of power, so a separate battery system had to be installed to power the radio (remember, a generator from the engine caused too much static) and these extra batteries were put in their own boxes under the seat or sunk in the floor.

The last problem they faced was one of signal strength.  Home radios were not mobile and stayed in the same place all the time, so they can lock in on and hold a signal.  The car radio couldn’t do this because as a car moves, so does the radio in that car.  And because it was still the early days of radio, broadcast signals from the radio stations like RCA were really not that strong.  So a moving car was like a moving target, going in and out of range all of the time. This problem was fixed by making the antennas bigger or longer and it was often placed as a mesh on the roof or as a thread under one of the running boards.

So, our young inventors solved all of the problems they faced with perseverance and ingenuity, something all successful inventors have in common.  They worked hard and created a working car radio.  But, that’s not the end of our story. No, as the story goes, our young inventors took their invention to a radio convention in Chicago.  As chance would have it, they met Paul and Joseph Galvin, who owned a manufacturing company that made a device that allowed battery-powered radios to run on household AC current. The Galvan brothers immediately saw the potential of a mass-produced, affordable car radio and worked a deal with our inventors to start and manufacture car radios. 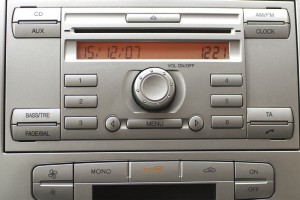 So, they went to work and soon had a prototype car radio that they called the “5T71”. But the 5T71 wasn’t a very appealing name and they wanted a name similar to many phonograph and radio businesses, which used the suffix “ola” for their names (eg, Victrola).  Since they were putting radios into motorized cars, their radios became “Motorola,” for motorized Victrola. So in 1930, Galvin Manufacturing introduced the first car radio as the “Motorola.” It was one of the first commercially successful car radios, and the first major product for the company that later became Motorola, Inc.  As we know now, Motorola went on to sell millions of car radios, and became an innovative leader in transistors, solid-state electronics, semi-conductors, televisions and cell phones.

As our story ends, our inventors went on to fame and fortune and we all got the benefit of being able to listen to music or talk radio in our cars.  And while we can’t say that this story is absolutely true, it’s nice to think that something we love and use every day may have started with a young woman who wanted to listen to music on a romantic summer’s night in her boyfriend’s car.  If so, thank you young lady, whoever you are.