The Invention of Convenience: The Microwave

School is back in session and college students everywhere are heading back to campus. Home cooked meals are a thing of the past and students rely on a certain invention to quickly heat up their meals. More times than not, they will reach for a quick cup of noodles, but in order for this staple food of college diets to heat up, a microwave is needed.

So where did the idea for this invention that college students rely so heavily on come from?

The microwave oven, or as we know it, the microwave, was accidentally invented in 1945 by inventor, Percy Spencer. Spencer was conducting an experiment with a new vacuum tube called a magnetron while conducting research for the Raytheon Corporation.

The magnetron was invented during World War II at Manchester University in Manchester, England.  It produced microwaves with high frequency and power that was invaluable in directing allied aircraft in their quest to intercept German Luftwaffe raiders during the Battle of Britain.

The magnetron was given to Raytheon in the United States for further development and it was during this testing when Spencer discovered its potential.

The curiosity started when a candy bar began to melt in Spencer’s pocket during an experiment with the magnetron, after this, he became intrigued. So he tried another experiment with popcorn. When the kernels began to pop, Spencer realized the potential of this revolutionary process. 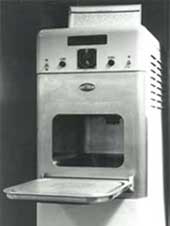 In 1947, the Raytheon Corporation built the first microwave oven, the Radarange, which surprisingly enough, weighed in at 750 pounds, was 5 ½ feet tall and had a hefty price tag of $5,000. 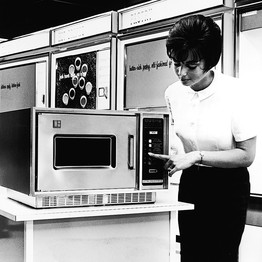 After countless experiments and improvements of the invention, Raytheon licensed its technology to the Tappan Stove Company.

On October 25, 1955, the first domestic microwave was sold by the Tappan Stove Company. At the time, this large, 220 volt wall unit gave families the opportunity to buy the invention for $1,295.

So, how does the invention of the microwave actually work?

First, the microwave utilizes a magnetron that has been used since the time the invention was first discovered. The magnetron is very similar to a radio transmitter in that it makes very short radio waves that enter right into the food to a depth of about 2.5cm. These waves make the water molecules swing back and forth at a rate of about 2.5 billion times a second.  This engagement heats up the molecules around it and as they warm up, the heat makes its way inside of the food. This process that was previously explained is known as conduction. This same process takes place in a normal oven; however, the energy inside of the microwave goes deeper so that the food cooks at a much faster rate. In an ordinary oven, the energy remains mostly near the surface.

This invention could be one of the most important inventions of the 20th century and now hundreds of millions of homes and dorms worldwide are equipped with this useful appliance.

Because of an accidental mishap resulting in the melting of a Mr. Goodbar candy bar in the pocket of Percy Spencer, this amazing invention was born and is now estimated to be in more than 90% of American homes.