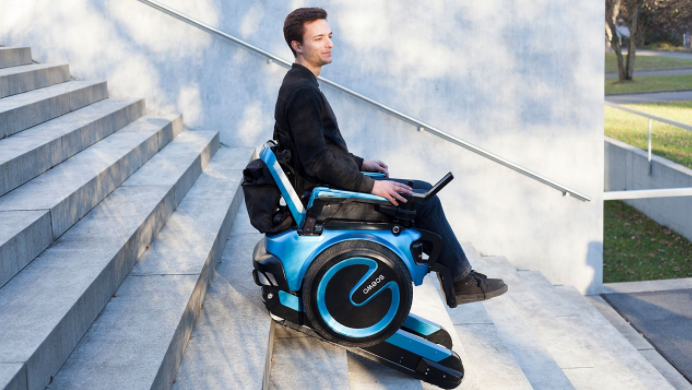 A new wheelchair could be hitting the market this year thanks to one group of persistent grad students from Sweden. The Scewo chair uses specialized rubber tracks to grip on to stairs, allowing for the chair to maintain stability, even on spiral staircases. Its large wheels allow the chair to maneuver many obstacles, while still being able to fit through doorways and turn on a dime.

The students began this life-changing project as they were finishing their bachelor degrees. After having built a successful prototype for a class project, they realized they were on to something. Their class has since ended; however, five of the students believed in this new product so much so that they began working on it in their free time.

Two of the five group members who continued to embark on this project are paraplegic and act as test drivers, giving feedback during production.

This new chair features both wheels and tracks, allowing it to traverse numerous types of terrain. The chair even has a special lift feature, allowing the user to increase their height to grab objects out of reach or simply make eye-contact during a conversation.

The group has gone through countless amounts of sketches, spent days of coding software, created 3D models, and crafted physical components, all of which have contributed to the final design.

Now in their final phase of testing, the group is gathering feedback so that they can meet even more needs of those who are physically disabled. Once this phase of the project is complete, the group plans on pitching the chair to companies in hopes of having it mass-produced by the end of 2018.

The need for life-changing products will always be here. With the proper determination, drive, and will to succeed, anything is possible.