A young immigrant by the name of Jacob Starr built the first New Year’s Eve ball and for most of the 20th century, the company that he founded was responsible for lowering the ball.

Let’s just say, we are a little shocked that the first New Year’s Eve ball didn’t come crashing down, considering it was made of iron and wood, decorated with 100 25-watt light bulbs, measured five feet in diameter and weighed 700 pounds. 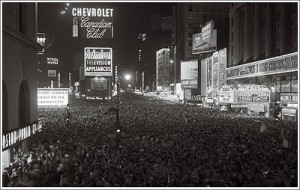 Every year since 1907, except for the wartime “dimout” of the lights in New York City that occurred in 1942 and 1943, the ball has been lowered on New Year’s Eve.

Even during those years when the ball wasn’t lowered, crowds of people still made the trek to Time Square to greet the New Year with a minute of silence that was followed by the ringing of chimes from sound trucks that were parked at the base of the tower. This tradition dates back to earlier celebrations at Trinity Church, where crowds would come together to “ring out the old, ring in the new.”

By 1920, the original ball was replaced with a 400-pound ball made of wrought iron. In 1955, the iron was replaced with an aluminum ball that weighed only 150 pounds, which remained until the 1980s. During the 80s, red light bulbs and a green stem converted the ball into an apple that aligned with the “I Love New York” marketing campaign. 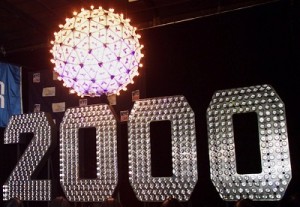 The year 2000 marked the millennium celebration and the New Year’s Eve ball was decked out with Waterford Crystal triangles and illuminated with 32, 256 Philips Luxeon LEDs. This combination of crystal and the latest in lighting technology infused elements of the past with elements of the future to mark the beginning of a new millennium.

Now that we have covered some of the important highlights of this age-old tradition, we wanted to take a dive into where exactly the tradition of lowering the ball came from.

For starters, the actual lowering of the ball was used to signal the passing of time, which dates back to long before New Year’s Eve was ever celebrated in New York City’s Times Square.

The first “time-ball” as it was called, was originally installed on top of England’s Royal Observatory at Greenwich in 1833. Every afternoon at one o’clock, the ball would drop and this would allow the captains of nearby ships to precisely set their chronometers.

This tradition is still carried out at the Naval Observatory in Washington, DC, each day; and, as we know, once a year at the stroke of midnight, the ball descends in Times Square to mark the beginning of a new year.

The age-old traditions of New Year’s Eve are still intact, and this year, 2,688 Waterford Crystal triangles will serve as an introduction of the new design that will feature a series of complex wedge cuts, which will give a sense of endless mirrored reflections. These reflections will mimic a kaleidoscope of colorful patterns that will inspire our imaginations.

As the beauty of the New Year’s Eve ball continues to evolve, we can never fully imagine what new innovations will be available in the future. As technology evolves and the world of innovative inventions continues to shine on into another year, we are excited to see what 2014 has in store!