Companies are starting to transfer the technology of 3D printing into their ideas, in order to create their newest inventions; 3D printed athletic footwear.

Industry giants like Nike and New Balance have translated the advancements of 3D printed technology into the world of apparel, specifically, for professional athletes.

These 3D printed shoes use the up-and-coming invention to create lightweight shoes that, in essence, mold to the athlete’s feet, thus increasing their speed and performance.

So how are 3D printed shoes different than regular shoes? Let’s take a look at both Nike and New Balance 3D shoes and how they claim to enhance the athlete’s performance. 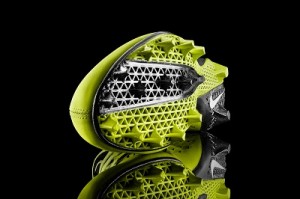 Nike 3D printed athletic cleat- Weighing in at just 5.5 ounces, the Nike Vapor Laser Talon was specifically invented and designed for gripping the football field turf, in order to help American football players excel in the highly important, 40-yard dash. In addition, the design of this shoe enables an athlete to maintain the initial drive stance, along with giving the athlete more speed and power during the first 10 yards, which are the most important to achieving a solid time. 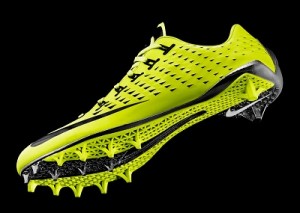 The idea of a decreased 40-yard dash time is carried out by the Selective Laser Sintering technology.  This technology employs a high-powered laser to selectively fuse thermoplastic particles, usually a plastic or metal powder, into the desired solid. This technique that Nike uses allows them to create a cleat plate in a much shorter amount of time, while at the same time, increasing the overall weight, which offers many benefits to the athlete’s performance. 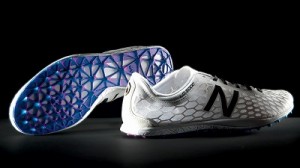 Bolas said, “I always wondered what it would be like to have custom shoes. They gave me a much more natural feel, with a perfect balance between the flex of the sole and still the responsiveness of a stiffer plate.”

After a long research-and-development process that was focused on ensuring that the shoes met Bolas’ individual needs, New Balance was able to create tailored spike plates. The process began when Bolas wore shoes that were wired with sensors to help designers at New Balance get an idea of how his foot interacted with the shoe. In addition, Bolas ran on tracks that were equipped with force plates that measured his impact with each stride. High-speed cameras also were used to add a detailed look at the interaction between his shoes and the track. Once this information was collected, just like Nike did, New Balance used the technology of Selective Laser Sintering to create the shoes. 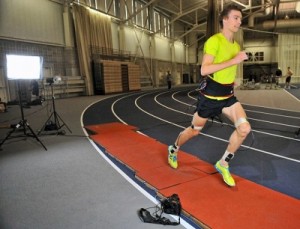 For both brands, a custom spike plate entailed an expensive injection molding process. However, the invention of 3D printers offered them a solution to this expensive and time-consuming process and has now increased the speed of production, while decreasing the cost.

Both of these companies have invented a product that is intended to increase the speed and performance of professional athletes, through the use of 3D printed technology. Both Nike and New Balance have set the tone in the world of 3D printing by creating products that have a light-weight design and the ability to grip their intended surface with ease.