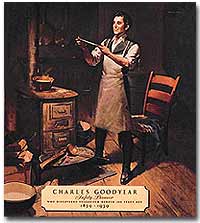 As summer approaches and we jump in our cars for a road trip or to simply cruise around, we want to make you aware of an upcoming anniversary for one of the incredible products that makes all that driving possible. On June 15, 1844, Charles Goodyear received a patent for his process to vulcanize rubber, considered one of the most important chemical processes of that century. Without vulcanization, we might not have rubber tires at all, and roads would probably feel a whole lot bumpier.  So let’s meet the man who made it possible for us to have all the wonderful things that rubber is used for in our lives, and gives us a nice soft ride to boot.

Charles Goodyear was born in New Haven, Connecticut, in late December 1800. He was the oldest of six children; and in his teens, he went to Philadelphia to learn the hardware trade. By the age of 26, Goodyear had opened his own hardware store, specializing in agricultural implements. While business was good for a while, by the early 1830s his store was failing and he was looking for another business. Around 1832, Goodyear began to hear about ‘gum elastic’ and found that factories in New England had been manufacturing goods, such as aprons, hats, carriage tops, and waterproof shoes. This gum elastic, or natural rubber, was harvested from the sap that oozed from the bark of trees native to Central and South America.

In 1834, Goodyear visited a rubber company’s retail store and was struck by a new product on display. It was a rubber life preserver, and he could see that the tube used for inflation wasn’t very effective or well-made. So he decided he could do better, so he went home to make better tubes. But when he returned to the store with his invention a few days later, the manager told him that the company was on the brink of bankruptcy because his customers were demanding refunds for all of the shoes, boots, raincoats, and other items made of rubberized cloth. The customers returned these products because the rubber they were made with would melt into a gooey, foul-smelling mess in the heat of summer and froze stiff in the winter.

As rubber’s fatal flaw became apparent, the ‘Great India Rubber Panic’ of the 1830s caused most of New England’s rubber factories to close. While the rubber industry in America seemed destined for failure, Goodyear didn’t give up. Despite having no formal scientific training, he decided he would figure out a way to make rubber easier to handle. After years of experimentation and little money to support his large family, Goodyear had a breakthrough when, in 1839, he accidentally spilled some India rubber, sulfur and lead onto a hot stove. What resulted was a substance that was hard but pliable. In fact, the new material had ‘memory’—it returned to its original shape after being twisted. This process (later called vulcanization) made rubber heat-proof, waterproof and winter-proof; and it opened the door for an enormous market for rubber goods.

Even though he solved the huge rubber problem, the public’s view of rubber was still tainted from the previous episodes of gooey rubber; so his efforts to secure capital 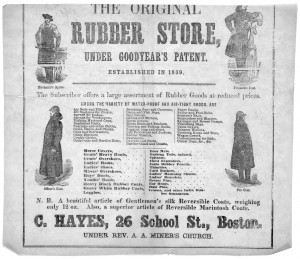 landed on deaf ears. At last, in 1842, he managed to secure some backing and started a small factory in Springfield, Massachusetts. The factory was run largely by Charles’ two brothers and his brother-in-law; and in that factory, the team worked out the kinks of making the invention practical. By 1844, the process was sufficiently perfected and Goodyear felt it safe to take out a patent.

Although he was hailed as a great inventor at expositions all over the world, Goodyear was barely solvent when he died in 1860. Luckily, royalties from his invention gave his surviving children enough money to enjoy the comfortable life that had largely eluded their father. And his legacy was so great, that in 1898, almost forty years after his death, Frank Seiberling started The “Goodyear” Tire & Rubber Company in recognition of Charles Goodyear’s contribution to the products they made; rubber tires for bicycles and carriages. When the automobile age started, “Goodyear” became a household name and today has sales of more than $20 billion. So the next time you’re out for a ride in your car, remember Charles Goodyear made that smooth ride possible. 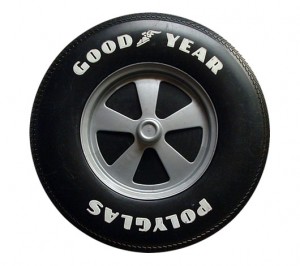