Writing and drawing tools are considered some of mankind’s greatest inventions. They have allowed the recording and conveying of thoughts, feelings, ideas – and grocery lists – for thousands of years. They are the very reason we know the history of us. Pencils and pens have given everyone in this world quick, easy and affordable access to put on paper what lives in their minds. 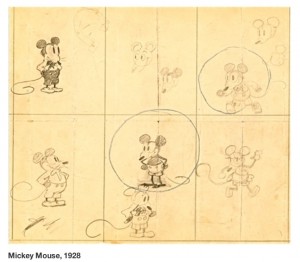 Writers, artists and draftsmen are just some of the creative types whose lives and careers have been transformed by these ingenious tools. Celebrated novelist John Steinbeck used 300 pencils to write East of Eden. Trail-blazing animator and entrepreneur Walt Disney first sketched Mickey Mouse’s ears with a pencil and the rest is history.

The origins of the pencil and pen are actually just as fascinating as the words and pictures they have recorded throughout time. The earliest means of writing with pen and paper as we know it was developed by the Greeks, and perfected by the Romans.

The writing instrument that dominated for the longest period in history – over 1,000 years — was the quill pen. Introduced in Europe around 700 A.D. and made from a bird feather, quill pens lasted for only a week before it was necessary to replace them. Lewis Waterman of New York patented the first practical fountain pen in 1884 and in 1931, Hungarian Laszlo Biro invented the ballpoint pen — the writing implement of choice for most people today because of their neatness and reliability. 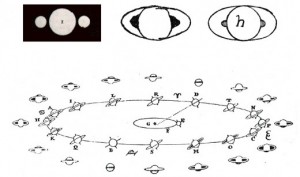 (A sketch of Saturn by Galileo)

The idea for the pencil came much later in human history and quite by accident. Some time prior to about 1560, graphite was discovered near Borrowdale, England, supposedly when a large tree was uprooted in a storm, exposing a black substance beneath its roots.

Because graphite is soft, it requires some form of encasement.  Graphite sticks were initially wrapped in string or sheepskin for stability. Shortly after, a superior technique was discovered: two wooden halves were carved, a graphite stick inserted, and the halves then glued together—essentially the same method in use to this day.

Because graphite is soft, it requires some form of encasement.  Graphite sticks were initially wrapped in string or sheepskin for stability. Shortly after, a superior technique was discovered: two wooden halves were carved, a graphite stick inserted, and the halves then glued together—essentially the same method in use to this day.

Although the pencil was first officially documented in 1565 by Conrad Gesner, and its invention is sometimes attributed to him, it wasn’t until the late 1700s that manufacturing techniques similar to those practiced today were developed.

The method of making pencils was painstakingly slow, so Joseph Dixon, an inventor and entrepreneur, developed a means to mass-produce pencils. By 1870, The Joseph Dixon Crucible Company was the world’s largest dealer and consumer of graphite and later became the contemporary Dixon Ticonderoga pencil and art supplies company.

In 1858, Hymen Lipman did us all a great favor when he received the first patent for attaching an eraser to the end of a pencil. As we continue to use the pencil to help sketch the future, we can also rely on the eraser to make a few revisions along the way.