Innovation You Can Feel at Disney

Summer is the perfect time to take a family vacation and what better place to go than to a Disney theme park?

The innovation and ideas at Disney never stop. In fact, last summer, the idea people at Disney came up with a new way to feel phantom objects floating in the air.

The idea concept of AIREAL was a result of the research by University of Illinois PhD student Rajinder Sodhi and Disney Research’s Ivan Poupyrey. 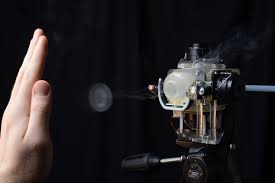 The AIREAL puffs air rings allow a person to actually feel objects and textures in mid-air without the need for special controllers or gloves.

This invention is essentially a set of five speakers in a box that tracks a person’s body and then fires low frequencies through a nozzle, in order to form donut-like vortices.

Furthermore, AIREAL can do a myriad of things from creating a button for you to touch in mid-air to creating whole textures by pulsing the bubbles to mimic water, stone and sand.

There also is a convenience factor included in this invention, due to the fact that a single AIREAL could support multiple people and a grid of this invention could create extremely immersive rooms, which could produce a sensation, like a flock of birds flying by, for instance.

Not to mention, this new technology is designed to use a vortex or a ring of air that can travel great distances, all the while keeping its shape and speed. When the vortex touches the user’s skin, the low pressure system inside collapses and reveals a force that the user can feel.

But, as if this invention couldn’t get any cooler, it’s actually almost entirely 3D-printed using a 3D-printed enclosure, a flexible nozzle and a pan and tilt gimbal structure that is capable of a 75-degree targeting field. The flexible nozzle is what allows a vortex to be precisely delivered to a location in 3D space.

This invention is part of Disney’s long-term vision for creating large-scale computer augmented environments that can deliver interactive experiences seamlessly at any time, everywhere.

The free air tactile feedback technology also is a key component of these future interactive inventions and offers a wide range of opportunities, including gaming and storytelling, mobile interfaces and gesture controls among a myriad of others.

Take a look at this video to get a better look at Disney’s AIREAL: