History Tuesday: The Invention of Rockets

April has an important place in space history since two seminal events happened in this month. First, on April 12, 1961, Russian cosmonaut Yuri Gagarin became the first human in space, traveling aboard the Soviet spacecraft Vostok I to an altitude of 187 miles above the earth. Then, exactly twenty years later, on April 12, 1981, the first space shuttle flight occurred with the launching of Columbia with astronauts John Young and Robert Crippen aboard. Columbia spent 54 hours in space, making 36 orbits, and then landed at Edwards Air Force Base in California. Since rockets are the reason we’re able to explore space, we wondered how they got started, and here’s what we found. 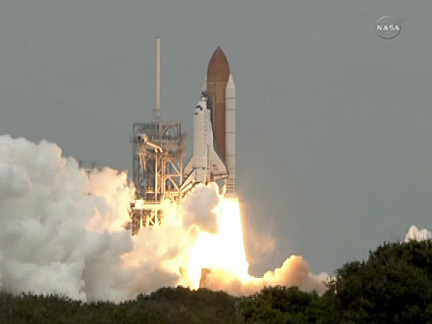 According to NASA, a Greek scientist named Archytas, around the year 400 B.C., amazed people by flying a steam propelled wooded pigeon suspended on wires. Steam propulsion notwithstanding, we feel it was the invention of gunpowder in Ninth Century China that is really the precursor to the modern rocket. The first use of gunpowder in rockets is unclear, but the first recorded use of a rocket in battle was by the Chinese in 1232 in a battle against the Mongols. Gunpowder would remain the fuel of choice for rockets until the Twentieth century, when two men changed everything.

First, in 1903, Russian mathematician Konstantin Tsiolkovsky published the first serious scientific work on space travel, which included the Tsiolkovsky rocket equation—the principle that governs rocket propulsion. He advocated the use of liquid hydrogen and oxygen as fuel in order to achieve greater range and stated that the speed and range of a rocket were limited only by the exhaust velocity of escaping gases. For these ideas and his vision, Tsiolkovsky was dubbed the father of modern astronautics.

Meanwhile, in America, Robert Goddard was conducting real experiments in rocketry. His early experiments were with solid-propellant rockets but he realized, as Tsiolkovsky predicted, that a rocket could be propelled better by liquid fuel. Through hard work and many failures, Goddard achieved the first successful flight with a liquid-propellant rocket on March 16, 1926. Goddard’s experiments continued and his rockets became bigger and flew higher. His achievements include inventing a gyroscope system for flight control, a payload compartment for scientific instruments and a parachute recovery system to return rockets and instruments safely to earth. For these achievements, and many others, Goddard has been called the father of modern rocketry. 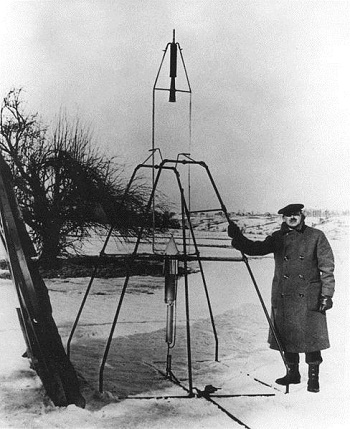 In Germany in the 1930’s, German engineers and scientists developed the V-2 rocket, which was used against London during World War II. Some of the innovations introduced were new fuel nozzles, a prechamber system for mixing oxidizer and propellant, and a guidance system that would allow the rocket to reach the proper velocity before shutting off the engines. When the war ended, both American and Soviet forces scrambled to capture existing V-2 rockets and parts, as well as the German scientists; and the space-race between the two countries was on.

Soon the Soviets launched Sputnik in 1957, quickly followed by the United States launch of a satellite of its own, Explorer I. In 1958, the United States formally organized its space program by creating the National Aeronautics and Space Administration (NASA). In April 1961, the Soviets launched Yuri Gagarin into space, and the U.S. followed by launching Alan Shepard a month later. In the 1960’s, both countries were launching rockets every few months, building more powerful engines to send two and three man crews into space with bigger payloads. And as manned space flight became a reality, sophisticated rockets like the Saturn V soon carried men to the Moon.

Technically, rockets have developed from simple gunpowder devices into giant vehicles capable of traveling into outer space. But for centuries, rockets have done much more than that; they have fueled our imaginations and opened the universe to wonder, awe, and exploration.