According to the old saying, “April showers bring May flowers.” And that’s great.  But May also brings something a little closer to our hearts (and stomachs):  Barbecue.  That’s because May is National Barbecue Month.  Though it is an unofficial holiday, what better way to unofficially start the summer season than with some burgers and ribs cooking on the grill?  So that got us thinking; how did all of this start?  Fire has been around for a very long time, but we wondered how long was it before the first caveman threw some ribs on the fire and said, “Wow, that taste great.”  Let’s find out.

Actually, before we can dig into the history, we need to point out that some purists say there is a big difference between “grilling” and “barbecuing.” They say grilling is just putting meat over a fire, while barbeque (or BBQ) is a slow method of cooking meat at a low temperature for a long time over wood or charcoal and is more suited to bigger, tougher cuts of meat (like a brisket) that do well with slow, even cooking. Either way, it tastes great.
So we think it’s safe to say that “grilling” can be credited to our cave people ancestors, who probably stumbled across an animal killed in a forest fire, ate it and found it a lot tastier than the raw variety.    And while we can’t exactly pinpoint this auspicious beginning, a group of archeologists found the remains of a 77,000-year-old horned cows barbecue by a river in the Netherlands. Many other archeological digs put the date even earlier than that.  Regardless of when our Homo erectus progenitors had their first bite, we’re sure that after tasting cooked food, they were hooked and never went back. 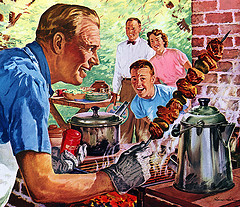 BBQ, on the other hand, is a little closer to home, chronologically.  First, the term “barbecue” appears to be a derivative of the West Indian term “barbacoa,” which means a method of slow-cooking meat over hot coals.  Then there are reports that the early American settlers were BBQing their meats during big celebrations, and even George Washington is rumored to have been a huge BBQ fan, though we’re not sure how with those wooden teeth of his.

Many say that BBQ really started in the 1800s during cattle drives out West, when the cowboys wanted steaks but their mean bosses didn’t want to feed them the good meat. So, the bosses gave the cowboys tough, stringy pieces of meat (like brisket).  Through some trial and error, the cowboys figured out that if you left this brisket cook for a long period of time with indirect heat, it tasted pretty darn good.

Others say that true BBQ started in the South prior to the American Civil War, and it was the pig that was a staple of the slow cooking, not beef. In fact, it’s said that plantation owners would release pigs into the woods to graze for months knowing that they could be easily hunted when food supplies were low.  But the months of foraging made the meat tough, so the Southerners learned to slow cook the pork so that the meat fell off of the bone.

And in the 1950s, with the construction of the interstate highway and the explosion of the suburbs, people had the backyards perfectly set for a life filled with BBQ, and it really began to thrive.  So no matter what your preference, grilling or barbequing, beef or pork; American’s eat it, love it, cook it millions of times a year, and have contests to see whose BBQ is the best.  All we can say is, “Ladies and Gentlemen, start your grills.”
Photos:
http://grillingaddiction.com/wp-content/uploads/cave-grilling.jpg
http://farm4.static.flickr.com/3243/3006923221_859600b313_m.jpg