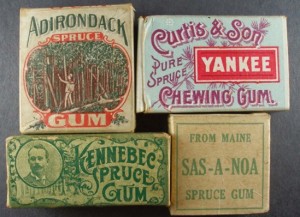 Almost 100 years ago this week; June 29, 1915 to be exact, Juicy Fruit was trademark registered.  But surprisingly, the history of chewing gum goes back even farther than that, a lot farther. In fact, people have been chewing all sorts of chewy things for centuries—tree bark, plant sterols and even paraffin wax.  It’s said that the Native American Indians introduced early American settlers to the habit of chewing spruce tree resin. The colonists adopted this practice, and in 1848, a man named John Curtis created the first commercial chewing gum, which he called The State of Maine Pure Spruce Gum. Around the same time Curtis was making his Spruce gum, other people were using paraffin wax to make chewing gum; and in 1869 a man named William Semple filed a patent on his recipe for paraffin chewing gum. But you can’t blow bubbles with spruce resin or paraffin wax, so let’s take a closer look at the history of the type of chewing gum that we all know and love today.

Real ‘chewing gum’ goes back to the 1860s, and its invention is credited to a man named Thomas Adams. Adams was working with chicle, a sap gum derived from Mexican sapodilla trees. He was trying to use it to make bicycle tires, rain gear, toys, or just about anything normally made from rubber —remember the big rubber craze of the mid-1800s—but he was never able to get the chicle supple enough to respond like vulcanized rubber. The story goes that he was about to throw out all of his experiments when he saw a little girl buying some paraffin chewing gum at a drug store. He though that his chicle had to taste better than wax and popped a piece into his mouth and starting chewing.  It did taste better, and he really liked it! Adam’s started a company with his sons and soon they were selling Adams New York Chewing Gum, Black Jack Licorice Gum, and as you might have guessed, Chiclets.

As sales grew, so did competition; and in 1892, a name synonymous with chewing gum came into the picture: Wrigley.  William Wrigley originally sold soap and baking powder but began making chewing gum in 1892 so that he could package a free box of gum with each can of baking powder he sold.  Soon the gum was more popular than the baking powder, so the company retooled and made the chewing gum its main product. By 1893, Wrigley launched his classic chewing gum brands, including Juicy Fruit, Spearmint, and Doublemint gum.  By 1906, Wrigley was the number one brand of chewing gum in the country. 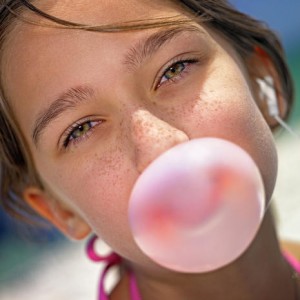 There were many other companies competing for their share of the US chewing gum market in the late 1800s, and many folks continued to jump into the fray. In 1893, Dr. Edward Beeman, an Ohio physician, added pepsin powder to chewing gum and marketed it as a digestive aid.  In 1899, New York druggist Franklin Canning invented Dentyne gum to help people get rid of bad breath.  In 1906, Frank Fleer invented the world’s first bubble gum, but it was too sticky and never sold well.  It took over twenty years, but he finally fixed the problem; and introduced every kid’s favorite Double Bubble in 1928.  By the 1950s, sugarless chewing gum came onto the market—it was invented by a dentist, of course.  And in 1951, the Topps Company got their sales into high gear by adding player baseball cards to each package of gum.

Not much has changed in the last fifty years or so. Kids still love bubble gum and adults still use chewing gum mostly as a breath freshener. But no matter why we use it, chewing gum is one of those little pleasures in life that Americans still seem to enjoy.