Flying Burgers & Sushi On The Go 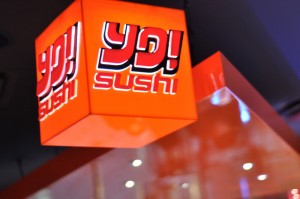 Founded in 1997 by British entrepreneur Simon Woodroffe, YO! Sushi is a chain of Japanese food restaurants with over 75 locations worldwide that prides itself in providing not only delicious and unique menu items to patrons, but delivering them within a fun, innovative atmosphere as well. For example, once you have decided what you’d like to eat for lunch, don’t worry about flagging down a waitress.

At YO! Sushi, all you need to do is grab the food you desire as it comes around on the conveyor belt and dig in! After being freshly prepared in the kitchen, varieties of sushi, as well as some Japanese cooked foods are placed on a belt, which carries the food around the restaurant, allowing guests to choose whatever they’d like right from their seat! 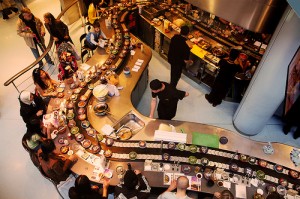 CEO, Robin Rowland, explains how, at YO! Sushi, the idea of “keeping things fresh” doesn’t stop at the kitchen door. “It’s all about innovation. Yo! Sushi is all about delivering a whole concept in an unusual, exciting way. Amazing food, conveyor belts, exciting stuff and lots of technical systems used well. And today, 16 years along, we’re pushing boundaries again.”

How are they pushing the boundaries now, you ask? When preparing to introduce their new burger, the YO! Burger, YO! Sushi knew they needed the presentation to be just as innovative as the food, which was quite the challenge. Hailed by some as the “healthiest fast food ever,” the world’s first sushi burger debuted in June 2013. It boasts a bun made of toasted rice and is accompanied by seaweed crackers, inviting diners to “Taste the Future.” To ensure that the presentation was worthy of such a cutting-edge dish, YO! Sushi introduced the iTray.

Rowland explained, “The iTray concept came from our thinking, ‘How are we going to show people how light and exciting and fun this food type is?’” Well, they took the “light and exciting” and ran with it, because the iTray will have you saying “It’s a bird! It’s a plane! It’s… my dinner!” by delivering the food via remote control aircraft! The flying iTrays are controlled by iPad and are capable of reaching speeds of up to 25mph – although we aren’t sure that the term “fast food” should be taken that seriously. Check out the video to see the airborne burgers in action!