What do Albert Einstein, Michael Jackson and Jamie Lee Curtis have in common? If you guessed that they are all famous, you are partially correct. However, another common thread that these three share is that they all held a patent at one point in their lives.

Although their ideas for their inventions were drastically different, each of them took a step towards making their idea become a reality.

In 2011, we wrote a blog about celebrity inventors, however, this time around, we wanted to take a deeper look at these celebrities and their patents!

Although it may not be a surprise that Albert Einstein would hold a patent, it may come as a surprise to think of Michael Jackson and Jamie Lee Curtis as patent holders. 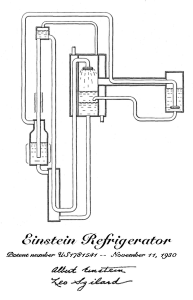 Albert Einstein– In addition to being the most famous scientist in the 20th century, Albert Einstein was also well-versed in the world of patents. For seven years, Einstein worked as a patent clerk and was responsible for examining the blueprints of other’s inventions and then deciding whether or not the idea for the invention was feasible. If they were, Einstein would have to ensure that no one else had already been given a patent for the same idea.

Perhaps one of Einstein’s most notable patents was for the Einstein refrigerator. This idea was jointly invented in 1928 by Einstein and his former student, Leo Szilard. From 1926 until 1933, Einstein and his co-inventor joined forces to improve home refrigeration technology. Motivated by a broken refrigeration system that leaked toxic fumes and killed a family in Berlin, Einstein and Szilard wanted to create a different type of refrigeration cycle that would avoid this problem. While working on this invention, Einstein used his many years of experience in the Swiss Patent Office to apply for valid patents for their inventions in several other countries. Einstein and his partner were eventually granted 45 patents in their names for three different models of the invention.

Michael Jackson– The year was 1988 and Michael Jackson was wowing fans with his anti-gravity dance moves in his music video for “Smooth Criminal.” Fans were in awe of the fact that the dancers were able to defy gravity and lean forward at a 45-degree angle to the floor.  During the music video, the dancers were able to do the move with the help of strings; however, Jackson wanted to take this move on the road. So he, and two other inventors, put their heads together, and the final product was the Anti-Gravity Shoe. In 1993, Jackson received a patent for his idea for the invention of the anti-gravity shoe, which would create an anti-gravity illusion. The invention would allow the person wearing the shoe to lean forward beyond his or her center of gravity by way of a specially-designed heel slot, which was detachably-engaged with what was usually a nail or post in the stage by simply sliding the shoe wearer’s foot forward and engaging with the post. The point of Michael Jackson’s patent was not for the potential sale of his idea; it was, in fact, so that no one could perform the same move in the same way until the patent expired. Jamie Lee Curtis– Aside from being a successful actress, Jamie Lee Curtis was also busy creating an idea for a diaper invention. In 1987, Curtis became an inventor when she had an idea for a diaper that was equipped with a waterproof compartment that held baby wipes. This invention would allow moms to have all the necessary components of changing their babies in one area. In 1988, Curtis was issued patent #4,753,647 for her invention of a disposable infant garment. However, her idea was never produced, due to the fact that she refused for it to be marketed until companies started making biodegradable diapers. The patent for this diaper invention expired in 2007.

Whether it was Albert Einstein working in the Swiss Patent Office, Michael Jackson filing a patent for his famous dance move, or Jamie Lee Curtis patenting her idea for an infant garment, the common thread between all three of these famous inventors is that they all took the necessary steps to reserve their idea by filing a patent.

The History of Patents