Edison’s Doll and Other “Out-there” Inventions

We all know the world of inventing is a risky one that is all about taking chances on ideas. Take Mr. D for example, his first invention idea was not as successful as he would have liked, because he was beat to the marketplace by a larger corporation.

Well, it turns out that these “failed” inventions are common with many of history’s famous inventors.

Today, we’ve found some not-so-great inventions from some of the most famous, most successful inventors of all time. Whether these ideas were just ahead of their time or simply just didn’t work, they are definitely worth a second look! Thomas Edison’s Talking Doll – This famous inventor had over 2,000 patents to his name before he died, so it is not hard to believe that one of his creations just didn’t quite work. Perhaps a predecessor to today’s talking dolls, Edison tried to combine his very successful phonograph with a children’s doll, in hopes that little girls everywhere could communicate with their dolls during playtime. Unfortunately, the contraption had a few fatal flaws and it cost the equivalent of $240-$600, which was a bit pricey for Edison’s day. 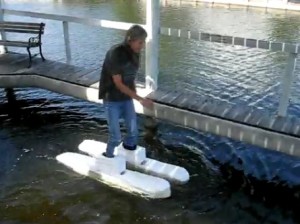 Leonardo da Vinci’s Water-Walking Shoes – Famed artist and inventor Leonard da Vinci certainly had a creative flair that didn’t stop with a few paint strokes. In fact, da Vinci tried to solve a problem that we’ve still not touched – walking on water! His inflated shoes resembled water skis, but were nearly impossible to balance and move in! Gunpei Yokoi’s Virtual Boy – Thanks to Yokoi, every ’90s child can lovingly remember his or her Nintendo Game Boy. What they may not remember is Yokoi’s Virtual Boy, a game system, with 3D graphics, that users were supposed to strap to their faces in order to play! The rumor is that Yokoi’s failed invention was the reason the former Nintendo genius left the company.

Sir Clive Sinclair’s Miniature TV – Among Sinclair’s electronic pocket calculator and fold-up bicycle was also his “pocket television,” a brick-sized portable TV. Although it was a genius thought, the mini TV’s screen was tiny, reception wasn’t great and it didn’t fit in most pockets!

Although they may have found failure on their pathway to success, it was the “no quit” attitude of these great inventors that brought us many, very valuable inventions. Read more about these great innovators’ failed inventions here!