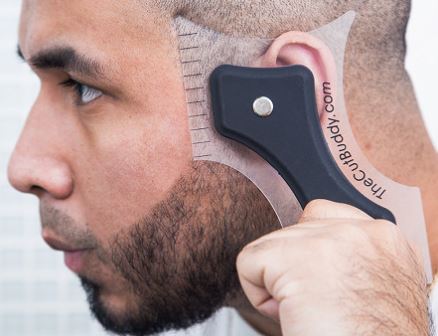 Joshua Esnard was an avid tinkerer from a young age. Esnard often found himself dismantling things, rebuilding them, and then pondering the designs he had observed throughout the process.

Growing up, Esnard’s father would cut his hair, always keeping the style the same. This lasted until Esnard was about to start middle school. He couldn’t bear the thought of walking into the classroom sporting the same haircut he had for the last five years.

He decided to take matters into his own hands. With both of his parents too busy to take him to the barber, Esnard took his father’s clippers and attempted to cut his own hair. The results were what you would imagine any middle schooler would be capable of pulling off – bald spots, an uneven hairline, and mismatched curves. It was then that he realized there needed to be something that could guide the clippers a certain way, every time.

Experimenting with different designs built from materials he found around the house, Esnard created a simple template that was able to give him a sharp, crisp look while cutting his own hair.

Over the next 15 years, Esnard shared his design with friends and family. The idea of selling his product for money never crossed his mind until one day he was talking with his girlfriend and realized he had a tendency to never finish things he started. Shortly after, Esnard found himself promoting his product in any way he could.

A few years later and a few more visits to the drawing board, the Cut Buddy now has different curves to fit a variety of head sizes from haircutting to beard grooming. The cut buddy went on to become a #1 Best Selling product on Amazon, having sold over 55,000 units.