Zeroing in on the Uses of Drones

On Monday, we wrote a blog that talked about Amazon’s future plans of using drones to deliver small packages to customers within 30 minutes of their order being placed. We thought that the idea of drones was so interesting that we decided to share with you a brief background on this invention, otherwise known as unmanned aerial vehicles (UAVs).

UAVs were first introduced to the United States Military because of their ability to be controlled remotely. The first UAVs were not very sophisticated, because they only had the capability to fly along pre-set paths and they operated off of an internal navigation system. Eventually, the servicemen began to informally refer to any machine that flew without the control of humans onboard as a “drone.”

The idea behind the drone is a category that refers to any unmanned, remotely piloted flying craft that ranges from anything as small as a radio-controlled toy helicopter to a 32,000-pound, $104 million Global Hawk.

Let’s take a look at some of the most common and iconic military drones! 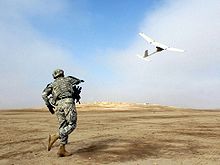 RQ-11 Raven– This drone weighs four pounds and can be launched just by throwing it. Once it is airborne, it’s then piloted by a hand-held unit that resembles a video-game controller. This is the most commonly used drone and more than 19,000 have been built. This drone is mainly used for exploring around corners and sending video footage of rooftops back to troops as they move through a city. 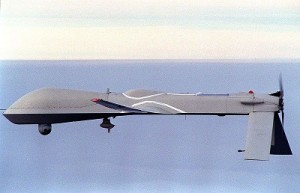 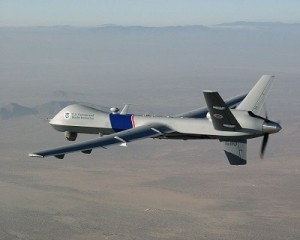 MQ-1 Predator and MQ-9 Reaper- These are the most iconic of the drones because they can be armed and have become the preferred tool for drone strikes. There is, however, a main difference between them, and that is that the newer Reaper is bigger and has a more powerful engine that also has the ability to carry much more than before. 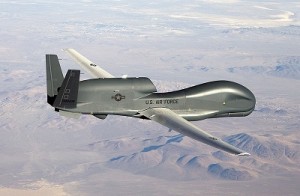 RQ-4 Global Hawk- This drone is 32,000 pounds, has a 130-foot wingspan and has the ability to fly for more than a day. The Global Hawk can go up to 60,000 feet and can take high-resolution images and detect and track moving targets on the land below from high elevations.

Just this year, the Federal Aviation Administration (FAA) certified two types of unmanned aircraft that were created for civilian use. The new drones are Institu’s Scan Eagle X200 and the AeroVironment’s PUMA. Both of these drones are about 4.5 feet long, have wingspans of nine and 10 feet and weigh less than 55 pounds.

The Scan Eagle was used by a major energy company off of the Alaskan coast that surveyed ice flows and migrating whales. The PUMA, on the other hand, is expected to be used in order to support emergency response crews for wildlife surveillance and monitor oil spills over the Beaufort Sea.

As you can see, drones are predominately used by our military, however, there are new drones being used for civilian purposes as well! But, for the most part, the usage of drones in the United States has commonly been limited to police and other government agencies.

Like we said before, Amazon is working on a project to one day use drones for their delivery system, so, it might only be a matter of time before more and more drones are being used for commercial purposes. As always, time and technology will tell if these plans will actually come to fruition!