Why is it that when someone says the word “inventor,” we immediately think of a man?  Go ahead, think “inventor” and see who pops into your head.  I’ll bet its Thomas Edison or Alexander Graham Bell or even Ron Popeil, the guy who does all of those infomercials.  But, I’ll bet none of you thought of a woman.  Well, you might say, there are tons of male inventors but hardly any women.  But, I’d say, you couldn’t be farther from the truth.

Over the years, there have been hundreds of women who have invented all kinds of things.  Things like windshield wipers, colored flares, the automatic dishwasher, the typing correction fluid Liquid Paper (once as indispensible as the delete key on your laptop), Scotchgard, Barbie dolls, the dye laser, and the “stronger than steel” material Kevlar.  All of these and many, many others were either created or improved by women.  And, I’m not even counting the tremendous innovations in the medical field, like the medical syringe in use at every doctor’s office and clinic, and Nystatin, the anti-fungal drug used to cure many disfiguring, disabling fungal infections. 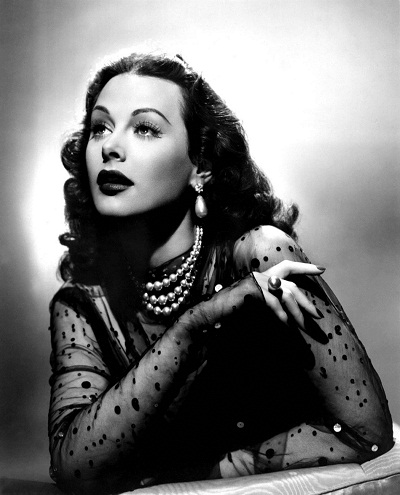 But, one female inventor caught my imagination, mostly because I’m an old movie buff.  When I read that Hedy Lamarr, an actress I’ve watched many times, was also an inventor, I just had to find out more.  It turns out that her real name was Hedwig Eva Maria Kiesler and she was born in Vienna, Austria-Hungary in 1913.  As a model, her tremendous good looks (she was called the “most beautiful woman in Europe”) landed her a role in a European movie called Ecstasy, which became a big hit and catapulted her career to Hollywood.  Throughout the ’30s and ’40s, she became a huge star, appearing in such movies as “Boom Town” with Clark Gable and Spencer Tracy and Cecil B. DeMille’s “Samson and Delilah.”

During World War II, radio controlled torpedoes were in full use by the US and Allies.  The problem was that if the Germans could identify the frequency the torpedo was being controlled on, they could jam it and make it miss its target.  What Lamarr and her partner realized was that if the torpedo could randomly change its frequency, then someone trying to jam the signal wouldn’t know which frequency it was on.  The key was to make both the transmitter and the receiver simultaneously jump from frequency to frequency – a difficult effort at best. But, they worked on an invention based on a player piano music roll and eventually invented a guidance device machine that could modulate its frequency at will.

Today, frequency hopping is used with wireless phones, GPS, many military communication systems and the principal anti-jamming device used in the U.S. government’s Milstar defense communication satellite system.  Unfortunately, Lamarr and her partner never got any of the credit (or money) from their idea.  They had signed away the patent rights to the Navy, who engaged the Sylvania Electronic Systems Division, in Buffalo, New York, to develop the idea into what it is today.

So, while most people will probably only remember Hedy Lamarr as the fabulous beauty in those old movies we watch on cable TV, you and I will know differently.  We will know that she was an inventor as well.