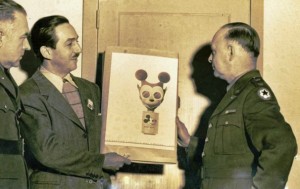 Ideas can be big or small, crazy or conservative, out-of-this-world or practical. Whatever it may be, an idea is an idea!

If you think that your invention idea is too off-the-wall to ever be created, let us fill you in on a magical secret… even Walt Disney, one of the most creative people in history, had his fair share of wacky ideas!

In fact, in January 1942, Walt Disney traveled to Washington D.C. to meet with chemical warfare and civil defense officials to check on a design that he had created for a gas mask… you read that right – a gas mask!

This gas mask was unlike any other, because it was reminiscent of none other than Mickey Mouse. Disney’s gas mask idea was created to find a Better Way to calm terrified children.

Though it wasn’t a normal invention idea from Walt Disney, he believed in his idea and worked hard to have his innovation come to life.

It’s this lesson that inventors from all over the world should follow. If you have an invention idea, believe in it, work on it and make it come to life!

If you’ve got an invention or innovation, submit your idea today!