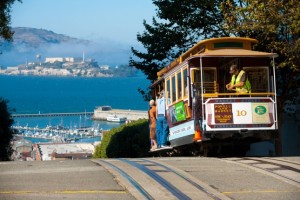 The inventor behind the cable car system, Andrew Hallidie, had witnessed many accidents of horse-drawn streetcars sliding backwards down steep cobblestone streets and injuring (or killing) the riders and horses. Hallidie’s company manufactured wire-rope—or cable—to pull heavy ore cars out of underground mines, and he realized he could create a comparable system to pull street cars up and down the steep roads with his wire-rope.

He devised an apparatus by which streetcars could attach to and release from a constantly moving giant coil of cable running in a slot beneath the streets. A centralized stationary steam-powered engine drove giant wheels that pulled the cable through the slot. Hallidie’s cable cars started running in 1873 and haven’t stopped since. In fact, the cars help attract over 16.5 million visitors to San Francisco every year. And the beauty of the cable car system—with 53 miles of track—can take tourists to all of the key attractions in San Francisco, from Fisherman’s Wharf to Chinatown. 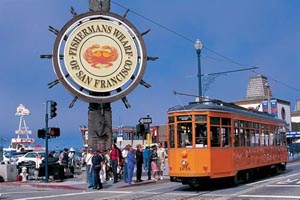 Fisherman’s Wharf: One of the busiest and most well-known tourist attractions in San Francisco is Fisherman’s Wharf, the home of San Francisco’s fishing fleet. As you might expect, seafood restaurants are plentiful at the Wharf, serving fresh seafood and crab literally right from the fishing boats. Some of the historic family restaurants going back generations include Fishermen’s Grotto, Sabella & LaTorre, Alioto’s, and Pompei’s Grotto. Fisherman’s Wharf is also home to many visitors’ favorite attractions; such as Ghirardelli Square, the Wax Museum, the Aquarium of the Bay, and the San Francisco Maritime National Historical Park. 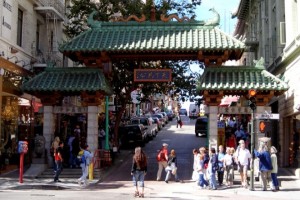 Chinatown: San Francisco’s Chinatown is the largest Chinatown outside of Asia as well as the oldest Chinatown in North America. It began in the 1850s as Chinese immigrants settled in this area of San Francisco when they moved to the area to work on the railroad and as miners during the 1849 Gold Rush. Today, Chinatown is full of great restaurants, art galleries and sightseeing attractions; especially on Saturday’s, when produce stands and food markets are set up for the locals to do their shopping. It’s a great way to get immersed into the culture. 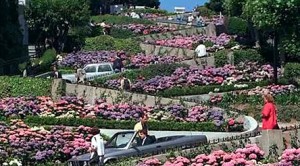 Russian Hill: Russian Hill is a residential neighborhood with a lot of trendy restaurants, unusual boutiques, and antique shops, and spectacular views of the city and the bay. It got its name from Russian gravestones found at the top of the hill. Russian Hill is probably most famous for Lombard Street, better known as the ‘world’s crookedest street,’ where tourists line up their cars for a chance to drive down. Of course, the residents are a little tired of their front yards as a tourist destination, so be polite and don’t drive down more than three or four times.

So here is a quick look at San Francisco; a city made possible by the invention of the cable car. It is truly one of the great cities of the world.