Most inventions aim to solve a problem. In the instance of Coin, their invention aims to lessen the load of a heavy wallet, not by using all of your money to buy their product, but to in fact, find a better way to condense the contents of your wallet.

A San Francisco startup by the name of Coin recently announced its first product.  This new invention is a credit card-sized device that has the capability to digitally store up to eight credit, debit, gift or membership cards and allows you to switch between them by pressing a circular button on the card’s surface. Additionally, you also can swipe the Coin in any conventional reader or ATM machine as if it were the original card. 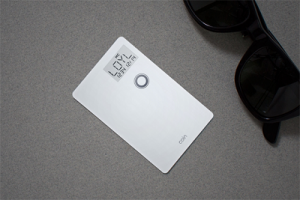 Coin is able to work due to the patent-pending magnetic strip that changes the demand on the card. The device will ship with a small reader that can be used to scan cards into the Coin mobile app. The app will then sync with the device itself over Bluetooth Low Energy (BLE), which is the same technology that is used by fitness trackers and smartwatches. The battery for this new invention lasts two years and the makers of Coin say that the battery powers a tiny display that shows the last four digits of the card that you chose to use as well as the expiration date and CVV.

So, you have all of your cards on one sole device, but what happens if you lose the card? Well, thanks to the BLE technology that powers the syncing of your phone, if you were to leave it behind at a restaurant, for example, your phone will alert you once you walk away.

Let’s take a look at promo video for this awesome invention.  Who knows, maybe next year, you’ll be using your very own Coin to purchase those steals and deals at the mall on Black Friday!