The Twisted History of the Pretzel

Whether salted or unsalted, crunchy or soft, there is one common characteristic that all pretzels share: their distinctive knotted shape. On April 26, we celebrate National Pretzel Day, so what better time to look back on the origin of the tasty pretzel? The pretzel has a rather “twisted” history, as there are several accounts regarding its original invention. 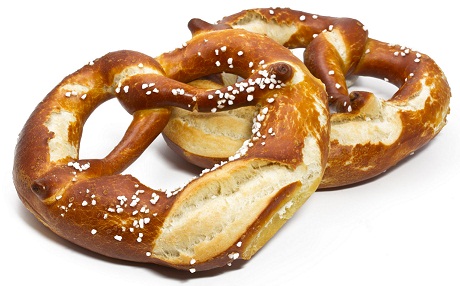 The most widespread story is that the first pretzels were invented by a monk in 610 A.D. During the season of Lent in northern Italy, the monk is said to have been baking unleavened bread, when he thought of a way to reward children for memorizing prayers. He twisted the dough, so it resembled arms crossed in prayer and named his creation “pretiola,” which means “little reward” in Latin.  Other sources say that something similar occurred, but in a monastery in southern France.

There are also theories that the pretzel originated in Germany by a desperate baker, who would only be acquitted from a jail sentence if he could make a small cake, through which the sun could shine three times. It is said that he created the “bretzel,” which was adapted in English as the “pretzel.” Despite dissent about the pretzel’s conception, we do know more about the first hard pretzels.

In the 17th century, a Pennsylvania baker accidentally overbaked his batch of pretzels. He tasted the hard pretzel and 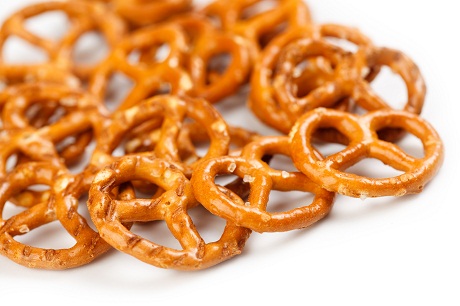 discovered that he had made a rather delicious mistake. Nearly 200 years later, the first pretzel bakery, the Sturgis Pretzel House, opened in Lititz, Pennsylvania, in 1861.

It wasn’t until 1935, however, that the Reading Pretzel Machinery Company introduced the automated pretzel machine. This machine automatically twisted pretzels, so bakers no longer had to make them by hand. Once factories were able to mass produce pretzels, they became a popular twisted treat worldwide.

Southeastern Pennsylvania is still the heart of pretzel production in America today and the state of Pennsylvania produces 80% of the country’s pretzels.  In 2003, Pennsylvania Governor Ed Rendell instituted April 26th as National Pretzel Day to recognize the importance of the pretzel to the state’s history and industry, as it is the birthplace of the world’s first hard pretzel.

So, whether you prefer your pretzel soft or crunchy, with cream cheese, mustard or another dipping sauce, today, enjoy it with little extra thanks to all those inventors who helped to make it so twistedly delicious!  Happy National Pretzel Day!