The Tricks, Treats and History of Halloween

Goblins, ghosts and Miley Cyrus; these are just a few of the costumes this year that will be scaring people on Halloween night! So, where exactly did the idea of Halloween come from? And when did this seemingly innocent new year celebration turn into a holiday filled with horror and fun?

It all began during the ancient Celtic festival of Samhain. Nearly 2,000 years ago, the Celts that were living in the area now known as Ireland, the United Kingdom and northern France celebrated their new year on November 1.  The purpose of this celebration was to acknowledge the end of summer and the harvest and the beginning of the darkness and cold winter that was on the horizon. This time of year was often associated with human death. 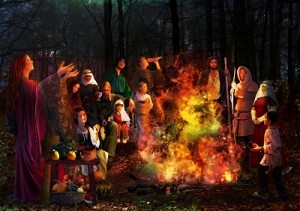 On the eve of the new year, the Celts believed that the lines between the living and the dead were blurred.  On the night of October 31, they celebrated Samhain, when they believed that the ghosts of the dead returned to the earth.

The celebration was filled with sacred bonfires, where people gathered to burn their crops and animals as a sacrifice to the Celtic deities. Clearly, the roots of the superstitious traditions of Halloween were planted.

After the Roman Empire conquered the vast majority of the Celtic territory, traditions were infused together; in addition to Samhain, two Roman festivals were now celebrated. The first was Feralia, a day in late October when the Romans traditionally remembered the passing of the dead. The second celebration was a day dedicated to honor Pomona, the Roman goddess of fruit and trees.

Here is a little fun fact about the latter of the festivals. The symbol of Pomona is the apple and the incorporation of this fruit into Samhain can possibly explain the tradition of bobbing for apples. 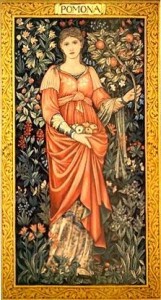 Perhaps one of the most common celebrations around this time of the year is the Catholic feast of All Saints’ Day on November 2, which became a day to honor the dead. All Saints Day was very similar to Samhain, because both holidays included bonfires, parades and the dressing up of saints, angels and devils (a foreshadowing of our current day costumes). The All Saints Day celebration also could be called All-hallows or All-hallowmas, a word derived from the Middle English word, “Alholowmesse” meaning “All Saints’ Day.”  The night before this holiday, the traditional night of Samhain was then called All-hallows Eve and eventually became what we know today as Halloween.

Now that we have covered the deep history, let’s take a look at how this holiday made its transition from Europe to America.

At first, Halloween wasn’t widely celebrated, due to the rigidity of the Protestant belief systems that were enforced in colonial New England. However, the holiday was much more common in Maryland and other southern colonies. Soon, a very distinctive American version of Halloween began to surface.

So, how were celebrations of Halloween in America celebrated? Well for one, the celebrations included play parties, public events that were held to celebrate the harvest, and neighbors gathering together to share their stories of the dead.

Through tragedy came the popularization of Halloween in America. With an influx of immigrants coming to the country, most of which were Irish who were fleeing Ireland’s potato famine of 1846, the celebration of Halloween became common nationally.

Tonight, if you go trick-or-treating, you can inform all of the people dressed in costumes that this tradition began when the Irish and English traditions joined forces and Americans began to dress in costumes and go from house to house asking for food or money. A word to the wise: tonight, you might want to stick with asking for just delicious candy!

After a hiatus, the centuries-old practice of trick-or-treating was revived between 1920 and 1950. This tradition still remains and offers a fairly inexpensive way for an entire community to celebrate Halloween.  Now, unlike when this practice was reintroduced to Americans, the cost of Halloween is at an estimated $6 billion, making it the country’s second largest commercial holiday.

From the idea of celebrating a new year and the start of the cold, long winter months to a holiday that is used to celebrate tricks and treats, Halloween continues to be a “spook”tacular holiday that people across the United States continue to enjoy! 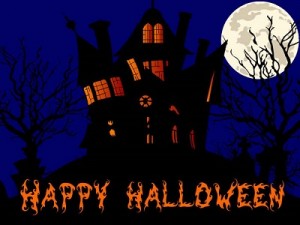