The Road from Chuck Wagons to Food Trucks

Once known as a “chuck wagon,” the idea of the food truck has been around for quite some time. In the United States, food trucks have been serving quick and affordable food on-the-go since the end of the U.S. Civil War, when there was a large expansion of settlements that moved westward across the country. 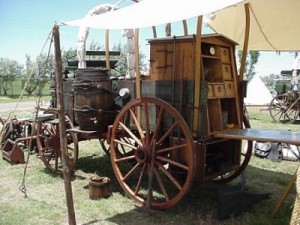 The idea for food trucks came to be when there was a great need to feed working men on the road. In 1866, Charles Goodnight found a better way to cook on the road when he invented the chuck wagon, a portable kitchen wagon that was used on the cattle trails.

The chuck wagon was usually drawn by oxen or mules and carried food, eating utensils, a water barrel, tools and bed rolls that were tucked away and covered by a canvas covering. A counter was attached to the wagon by hinges that folded outwards and was used for preparing the food and as a table.

The food prepared on the chuck wagon was fairly simple and easy to keep. Foods, such as peas, beans, corn and cabbage, were very common, as well as ample amounts of beef and bison steaks that were often added to stews.

By the 1890s, big cities like New York began to hitch onto the food wagon idea when ‘night lunch wagons’ became a staple. These wagons were created in order to cater to night time workers. Many of these trucks did such good business that, despite being mobile, they stayed in one spot. As time went on, the food truck contained mobile canteens that worked on US Army bases while others served the blue-collar work force.

The cowboy’s chuck wagon blazed the trails and led us to what we now know today as the modern-day food truck.

The revival of the food truck today is due in part to the recent recession, when many chefs were out of work and food trucks seemed to be the only viable choice in offering people delicious food that was prepared quickly and sold at a reasonable price.

However, the success and resurgence of food trucks wouldn’t have been possible without a side of social media, in particular, Twitter. This social media platform provided a convenient way to find out when and where a food truck would be located that day. 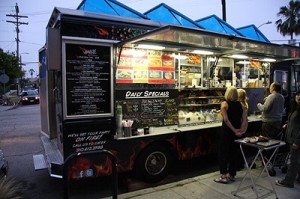 Now, more than ever, food trucks are everywhere. From street corners to county fairs, food trucks have taken the route of convenience and are delivering their meals on wheels to customers. However, some have expanded from plain and simple foods to delicious, gourmet foods; so, there are quite a few varieties of food trucks on the road today.

From the original idea of the chuck wagon to food trucks selling everything from sushi to cupcakes, the idea of the food truck has revolutionized the way we get our food today. From rural areas to the heart of the nation’s busiest cities, food trucks continue to travel their way into uncharted territories by catering events like weddings and even to those with late night munchies.

We’re sure that inventor and idea man Charles Goodnight could not have foreseen the success and evolution of his idea. Now, more than ever, if you see a food truck parked on the block serving food during the day and even to those at odd hours of the evening, you know that that food truck will offer a great end to a “Goodnight.”