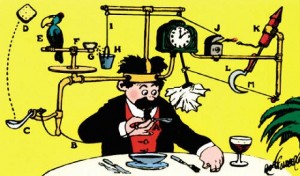 Here at Davison, we’ve designed a lot of inventions over the years that solve a wide variety of problems, usually in the simplest or most efficient way possible. Sometimes, however, the most exciting, funny or engaging way to solve the simplest problem is the most complicated. You may be asking yourself, “What is he talking about?” Why a Rube Goldberg Machine, of course!

Rube Goldberg was originally an engineer for the City of San Francisco Water and Sewers Department, a career that he abandoned to work as an office-boy at a San Francisco newspaper. After he was there for a while, he started submitting drawings and cartoons until he was finally published. He went on to become a founding member of the National Cartoonist Society and even won a Pulitzer Prize in 1948 for a cartoon warning against the dangers of Atomic Weapons. What he’s most remembered for, however, is his Weekly Invention strip. He would invent the most elaborate setups to perform the simplest tasks, ergo the Rube Goldberg Machine. For example, the Self-Operating Napkin. As the man takes a sip of his soup [A], he pulls a string [B], which yanks a lever that flings a ladle [C], which throws a cracker [D] in the air past a parrot [E], who upon leaving his perch [F] to catch the cracker [D] upsets a bag of seed [G] which spills into a pail [H]. The pail [H] increases in weight and pulls a cord [I], which opens and lights an automatic cigar lighter [J], setting off a rocket [K], which causes the sickle [L] to cut the string [M] and allow the pendulum with the attached napkin [to] swing back and forth, wiping the man’s mouth.


Almost a hundred years later, these devices continue to delight, entertain and educate millions every year. A cursory search of YouTube reveals over 15,000 videos. In 2010, the band OK Go made a video centering around a massive Rube Goldberg machine constructed for them by Synn Labs, a Los Angeles-based creative collective. The video for “This Too Shall Pass” has since been viewed almost 36 million times and includes a Lego diarama, a guitar that plays music on glasses with spoons, a model of the Mars Rover, an exploding TV, paint canons and an actual car.

A few weeks ago, a team of students from Purdue University set a new world record for the World’s Largest Rube Goldberg Machine. Their invention successfully completed 300 steps, and along the way made toast, juiced oranges, put stamps on envelops and ultimately popped a balloon, completing the challenge. The machine was part of the annual Rube Goldberg Machine Contest that started in 1949, and has occurred continually since 1988. It seeks to bring together and challenge the best and brightest minds at the high school and college levels in the United States, and as of this year, invites international students to participate as well. Past winners have won world records, gone on to design for cities and major corporations and have built amazing machines that range from re-creating Super Mario to developing new technology, specifically for the machines.

It’s not all about the science of the machines, though. Sometimes, it’s about the art of complexity. A Dutch design group, HEYHEYHEY, has turned Rube Goldberg machines into an art form. They’ve sought to create something engaging, entertaining and physical in a world of 3D, rendered-reality and Photoshop. Their latest project, Mini Melvin, miniaturizes the machine and houses it in two vintage suitcases. A 38-step process results in the “writing” and stamping of a postcard that says, “Wish you were here, Melvin, XOX.” Mini Melvin evolved from a much larger work created for the 2010 Dutch Design Week. It, in itself, was a marvel and worth watching. With Mini Melvin, HEYHEYHEY sought to create a vintage/forgotten feel with the piece, further engaging the audience with a warm, comforting feel. Both Melvin and Mini Melvin document and broadcast their viewers on the Internet as well, self documenting the process, the viewer and their reaction to it.

Almost 100 years later, Rube Goldberg has proven himself to still be relevant, influencing art, film, music and helping to shape the lives of young people everywhere. Remember: an invention doesn’t have to be elegant or simple or complicated. Sometimes, it can just be entertaining and silly. Don’t be afraid to think way outside of the box.