The Meaty History of Buffalo Wings 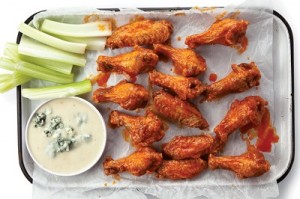 Buffalo wings have been synonymous with sporting events and an evening out with friends for what seems to be a very long time. But, in actuality, the idea of eating chicken wings drenched in signature sauces, ranging from barbeque, mild, hot and everything in between, has only been around for 49 years.

In 2012, the National Chicken Council projected that Americans would consume around 1.25 billion chicken wings during the weekend of the Super Bowl.  If you can’t wrap your mind around those figures, think of it this way: If the wings were laid end-to-end they would circle around the circumference of the Earth more than twice. Still can’t picture it? The translation of this idea is that the wings would be equal to the distance that would reach approximately a quarter of the way to the moon. Now that’s a lot of chicken wings!

So, where exactly did the idea for this deliciously-sinful meal come from? Although these wings have absolutely nothing to do with a buffalo, they do, in fact, have a lot to do with Buffalo, New York.

It all started at the “Anchor Bar,” a restaurant owned by Frank and Teressa Bellissimo, which was conveniently located in Buffalo, New York. 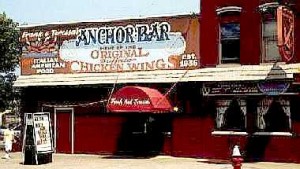 The story begins in 1964, when Teressa and Frank’s son, Dominic, arrived at his family’s restaurant after a night on the town, looking for a late-night snack.  When Dominic asked his mother to prepare some food, she came back with chicken wings, which were commonly used for flavoring stock for soup.

However, these weren’t just plain chicken wings, but a flavorful variation.  Teressa served her son and his hungry group of friends the deep fried wings that were covered in a secret tangy sauce. The wings became an instant hit with the guys and, once word spread about the new menu item, people began to pour into the bar to get a taste of these fried chicken wings that were served with a side of celery and bleu cheese. From that point on, Buffalo wings became an integral part of the Anchor Bar menu.

Although there isn’t one definite story behind the idea of the Buffalo wing, we are certain that there is one overarching verdict; Teressa Bellissimo is the mother of the idea and invention of Buffalo wings.