The Man with the Most Patents: Dr. NakaMats

In 2009, a film titled The Invention of Dr. NakaMats premiered and was centered on the famous Japanese inventor, Yoshiro Nakamatsu, otherwise known as Dr. NakaMats. This eccentric Japanese inventor goes to extremes, such as cutting off the oxygen to his brain while underwater, sleeping just four hours per day and eating one meal each day in order to discover new innovations. Dr. NakaMats is committed to obtaining patents and inventing unique gadgets.

A patent for this, a patent for that… and that is how the man with the most patents wound up with over 3,300 patents credited to his name.

On June 26, 1928, at the age of five, Dr. NakaMats made his first invention, when he created “automatic gravity adjustment equipment,” to which he believes can be credited to the way that airplanes fly today. Again, at the age of 14, after observing his mother having difficulty in the kitchen, he invented a pump that would help refill a soy sauce bottle, a device that is now used to pump kerosene. 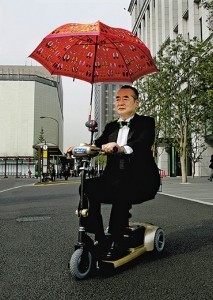 Since then, he has created an invention empire of his own. From outrageous to useful and everywhere in between, Dr. NakaMats has patented and invented thousands of new gadgets.

Although he is known as the man with the most patents, there is one patent and invention that stands out among the other thousands. While listening to Beethoven’s Symphony No. 5 at the University of Tokyo, he invented the floppy disk for IBM, “I became father of the apparatus in 1950,” he said.

In 1952, he received a Japanese patent for this invention; in 1979, Dr. NakaMats struck a deal, which included a licensing agreement, with IBM.

With over 3,300 patents, Dr. NakaMats has three times as many patents as Thomas Edison, who is credited with 1,093 patents. Dr. NakaMats is very direct when he says, “The big difference between Edison and me is that he died when he was 84, while I am now just in the middle of my life.”

In addition to patents and inventions, Dr. NakaMats is heavily involved in nutritional research. He believes that moderate exercise, and the right food and drinks can lead to longevity. Because of his research, he is vehement when he says that he will live until 2072.

Dr. NakaMats believes that by the age of 144, he will have patented 6,000 inventions. Only time will tell if this prediction of his longevity will prove to be true.