The History of the Roller Coaster 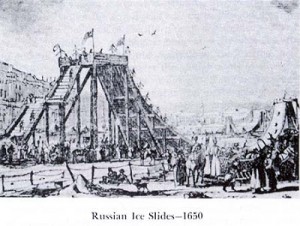 We have all been there one time or another; you are safely buckled into your seat as you slowly start to climb what seems to be a never ending incline only to drop at fast rate of speed through dips, twists and turns.

People all around the world have been enjoying the thrills of roller coasters whether they are big or small for quite some time.

The oldest roller coaster dates back to the so-called “Russian Mountains,” which were specifically constructed hills of ice that were located around Saint Petersburg, Russia.

These slides were invented in the 17th century and became very popular with the Russian upper class. In fact, Catherine II of Russia was such a fan of this idea that she had a few built on her own property.

Les Montagnes Russes à Belleville (The Russian Mountains of Belleville) was constructed in Paris in 1812 and the Promenades Aeriennes both featured wheeled cars securely locked to the track, guide rails to keep them on course, and higher speeds.

The idea for this invention known as the roller coaster began in Europe. However, a primitive kind of roller coaster was unintentionally being invented in the state of Pennsylvania.

Near the town of Mauch Chunk, a short railroad line transported coal from the top of Mount Pisgah to the canal in the valley below. Initially, mules would draw the empty cars up the slope of the mountain and then board a special car. Once the coal was loaded, the mule train would coast down the slope toward the canal. At the time, this railway was known as a switchback and was in operation until the mine was closed in the 1870s. 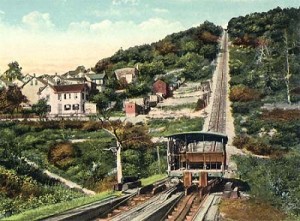 The abandoned railway was then converted into a railroad of enjoyment.  The switchback railway gained popularity and in 1873, the notion to sell the idea was put in order and around 35,000 passengers paid a fee of five cents per ride. This railway carried passengers until 1938.

However, the ride that we know today was later developed and designed based on the Mauch Chunk Switchback Railway in the United States by inventor and “father of the roller coaster”, Marcus Thompson.  He was assisted by fellow inventor, John A. Miller, the “Thomas Edison of the roller coaster”.

Miller earned more than 100 patents related to coaster technology and rider safety. Thompson, however, was generally credited with having invented the United States’ first roller coaster in 1884, at a park in Coney Island, New York. Thompson built a 450-foot steel and wood track on which the cars moved at six miles per hour.  Additionally, Thompson patented his idea for the “Roller Coasting Structure” in 1885. 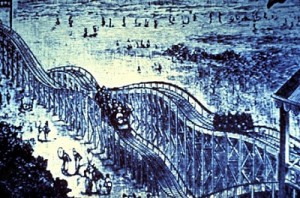 In order to stay competitive, La Marcus Thompson continued to make improvements and build larger rides. From 1884 to 1887, Thompson was granted thirty patents, which all lead to the advancement of the gravity ride.

From the original idea of the roller coaster that was conceived in Russia to the invention of the first roller coaster in America, the history of this ride has had its “ups and downs” but we can credit the ingenuity of these great inventors for giving us a thrilling and exciting ride known as the roller coaster.