The Deka Arm is Reaching Out to the Future

The power of the mind is something extraordinary. And, this new invention is nothing short of amazing.

Recently, the U.S. Food and Drug Administration (FDA) gave its initial approval for the sale and marketing of a prosthetic arm that translates signals from a person’s muscles. 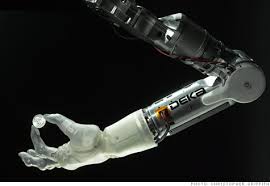 The aim of the Deka Arm System is to allow some people the ability to perform more complex tasks than they can currently do with their prostheses in a way that resembles the natural motion of the arm. However, the invention does not work for those with limb loss at the wrist joint or the elbow.

The Deka Arm works in a way that the electrodes are attached to the muscles of the wearer and transmit signals to a processor in the prosthesis. Then, the signals are interpreted and turned into up to 10 distinct movements.

This project was sponsored by the Defense Advanced Research Projects Agency (DARPA) and the U.S. Army Research Office. Dean Kamen, who also is the inventor of the Segway, along with his team at Deka Research, were all integral in the development of this invention.

Although just a few decades ago, Luke Skywalker’s bionic arm was nothing more than a prop of pure science fiction, that same technology is becoming our reality and it’s safe to say that the future is upon us!

Here is a quick video to get a better look at this innovative invention!