The 2014 Winter Olympics began on February 7; and, since that time, the Olympic torch has been ablaze.

The idea for the invention of the Olympic torch stems back to the ancient Greeks’ belief that fire was given to humankind by Prometheus, who believed that fire had sacred qualities.

The Greeks held their Olympic Games in 776 B.C. and just like today, the Games were held every four years at Olympia. Albeit, the first Olympics honored Zeus and other Greek gods, the Olympics now obviously do not. At the time, the Olympics marked the beginning of a period of peace for the often-warring Greeks. The runners, also known as the “heralds of peace” at the beginning of the Games, would travel all throughout Greece, declaring a “sacred truce” to all wars between rival city-states. The truce would remain during the entirety of the Games, so that spectators could safely travel to the Olympics.

Now, the constant burning flame is used solely during today’s Games; however, throughout Greece at the time, the burning flame was a regular fixture.

Today, the journey of the Olympic torch begins well before the actual Games commence. It all begins with an invention idea that is stowed away in the mind(s) of the designer or group of designers. The Olympic Committee receives several design proposals that are reviewed in order to determine who will turn their idea into a reality and build the torch.

Just like any invention, a lot of thought goes into the process and the team whose design is selected must invent a torch that is both aesthetically pleasing and, most importantly, functional.

Inventing an aesthetically-pleasing torch seems to be the easy part; while, the functionality part takes a lot of work to ensure that the torch will not only stay lit across the distance, but also make it through some tough conditions. 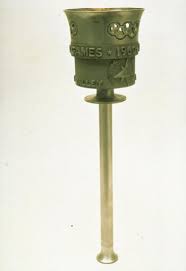 The modern Olympic torch originated with John Hench, who was a Disney artist that designed the torch for the 1960 Winter Olympics in Squaw Valley, California. From that point on, his torch design idea laid the foundation for all future torches.

Since then, future designers have tried to invent a torch that represents the host country, as well as the theme for that particular Olympics.

It takes about a year or two for the idea of the torch design to come to fruition. Once the torch is built, it is then tested rigorously in all sorts of weather conditions. Once it passes the tests, the torch is then replicated several times, because it isn’t just one torch that makes the journey into the Olympic stadium; it’s thousands. There can be anywhere between 10,000 to 15,000 torches that are created in order to accommodate the thousands of runners who carry the torches through each leg of the relay.

Despite the fact that the ideas for the torch design vary every four years, the torches must always contain some basic elements:

The 2014 Winter Olympics will come to a close on Sunday, February 23, and the torch that’s been lit throughout the duration of the Games will finally be extinguished. But, you better believe that the creative minds of designers already are bursting with ideas that “spark” their imaginations for the creation of the next Games’ torch!