Your summer vacation may be approaching pretty fast, so what are you going to do for hours while you’re on the beach? Play with the sand, of course! You’re never too old to indulge in a little creative fun in the sand!

Below, we’ve featured five modern tools to get you started, along with five patents for beach toys from long ago. Apparently, idea people have long been at work finding ways to make playing in the sand even more fun!

1.  Shovel & Pail – They’re classic staples for any day at the beach! Plus, they come in so many different colors and styles, everyone is sure to find a favorite!

2.  Sand Water Park Set – It may not be a toy that is usually seen on the beach, but it quickly will become your favorite when you’re able to create your own personal water park out of any sand structure you build!

3.  Seashell Collecting Bags – While you’re digging around in the sand, you’re sure to find something you’ll want to keep – so, why not tote it home in a decorative bag? Plain plastic bags? No way!

4.  Sandcastle Building Kit – With these handy aids, you’re sure to build the perfect sandcastle! They’ve got tools and molds that will make your castle the envy of everyone on the beach!

5.  Sand Station – For an even more relaxing day at the beach, let the station’s gears move any unwanted sand out of your way!

So, we all know and love these modern toys, but where did they come from? All ideas have to start somewhere, and beach toys are no exception! Here are five original beach toy patents that may make you rethink what you would be playing with in the sand, if these toys had caught on!

Click on the photos for more information on each patent! 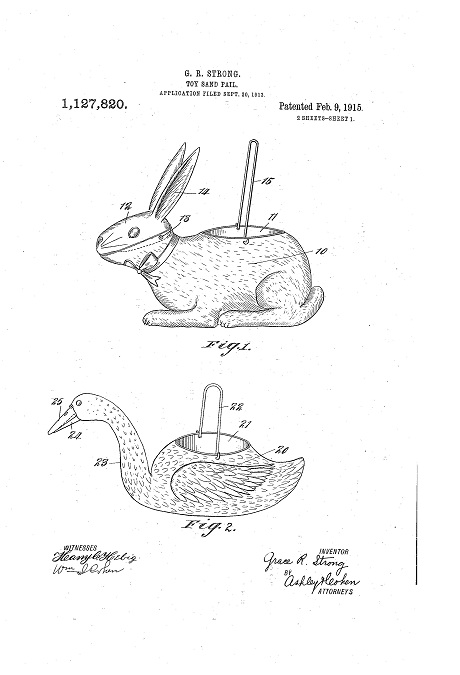 1.  In 1915, a woman named Grace Strong had the idea to make sand pails in animal shapes. This is one invention that very well could still catch on today!  We did go through a Silly Bandz craze didn’t we? Anything could happen! 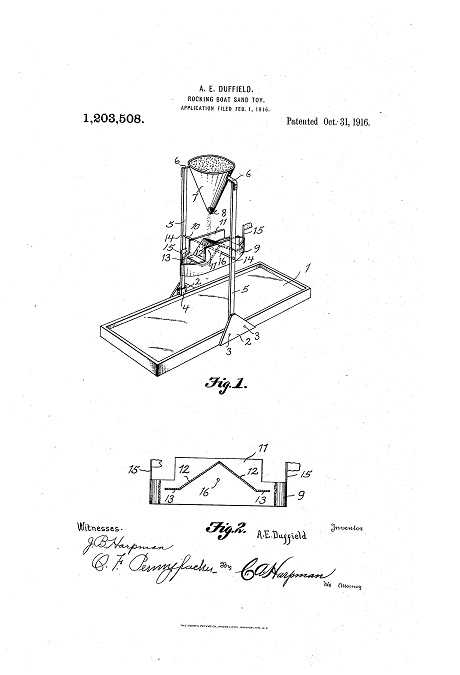 2.  Similar to the modern Sand Station, this patent does almost the same thing, but manages to look about 100 times more complex! Albert Duffield invented this toy and it was patented in 1916. Could you imagine taking this in your beach bag? 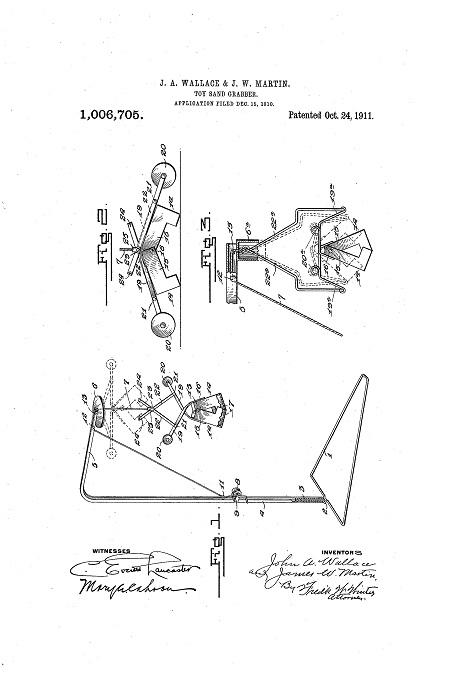 3.  With this contraption, there would be no need to manually move sand ever again! This Sand Grabber would make your sandcastle building process go much faster, if only it was on the market today!

4.  This version of the Sand Station is much fancier, but still has the same concept. The sand goes in to the funnel, then filters out onto the paddle wheel, which makes it spin. It may not be practical, but it sure looks cool! 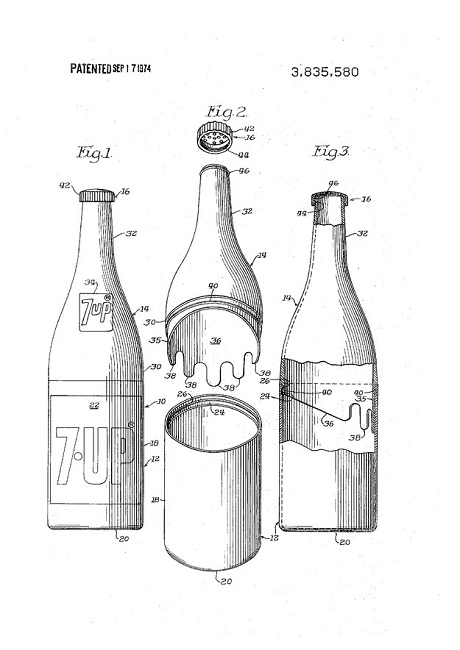 5.  Last but not least is this spin on the sand shovel. It’s meant to look like a regular soda bottle, but when you open it up, it becomes a very useful beach toy! It really could come in handy on a hot day at the beach – if you could fill it with cold soda!

These older patents might seem a little crazy now, but imagine where the beach toys we know today would be without them. So, next time you’re digging in the sand at the beach, keep in mind what tools you could be using!