Imagine this. It’s a warm summer afternoon and your burger is hot off of the grill. You have everything prepared and all that the burger needs is a dash of Ketchup. So, you grab for the glass bottle and repeatedly hit the bottom of the bottle with no luck. Now, you try the old trick of sticking a knife into the bottle’s neck to dislodge the contents. Finally, you have that dollop of ketchup you so patiently worked for, for the past minute. 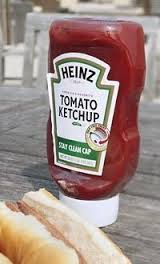 As much as we love Ketchup, we don’t really love the effort that goes into getting that delicious tomato product out of its bottle. So, it seems a simple solution would be to put the classic glass bottle back onto the shelf and opt for the squeezable bottle. Not so fast, because sometimes that squeezable bottle can be just as annoying. One reason is the noise that it makes, which sometimes can make even the most mature person giggle. Secondly, how about that nice watery juice that seems to conveniently come out before your ketchup? Gross.

Possibly because of the annoying scenarios above and because ketchup sales fell flat, the H.J. Heinz Co., the world’s most dominant producer of ketchup, wanted to get people to eat more and, in turn, use more ketchup. That’s when Heinz set out to find a better way to get ketchup out of the bottle faster.

Heinz then had the idea to invent an upside-down ketchup bottle that emptied fast and clean. “Ready when you are” was the introductory slogan that Heinz used for their new invention.

But, just like most inventions, there can always be a better way to do something. In 1991, Paul Brown was working relentlessly in front of a molding press that was geared toward turning injections of liquid silicone into flexible, one-piece precision valves.

Brown joined forces with his mold-maker, Tim Socier, and they both came up with a valve that was a little silicone dome with right-angled slits cut in its top. When the sides of the bottle were pressed, the dome’s slits opened, reminiscent of a flower’s petals, and the contents would be released. When the pressing stopped, however, the air would be sucked back into the dome, causing it to retract and the slits to close. 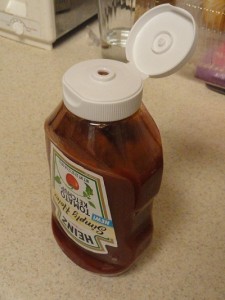 In 2002, Heinz introduced its very own pour-from-the-bottom bottle that doesn’t leak, thanks to a variant of Brown’s patented valve invention. Additionally, the bottle won’t spew ketchup, because of the little grooved trap that runs around the cap.

On the other hand, maybe Heinz should take note of a new invention that’s on the rise from the Massachusetts Institute of Technology (MIT) that could further solve the ketchup dispensing problem.

MIT PhD candidate Dave Smith and a team of mechanical engineer and nano-technologists at the Varanasi Research Group have been addressing this dining problem.

What’s their solution? The LiquiGlide, a “super slippery” coating that is made up of nontoxic materials that can be applied to all sorts of food packaging. So far, ketchup and mayonnaise bottles have been the first test target.

LiquiGlide is unique because it’s a kind of structured liquid that has characteristics of both rigidity like a solid but also lubrication like a liquid. The substance can work with different types of packaging like glass and plastic and can be applied a number of ways including spraying the coating on the inside of the bottles.

Take a look at the LiquiGlide in action!