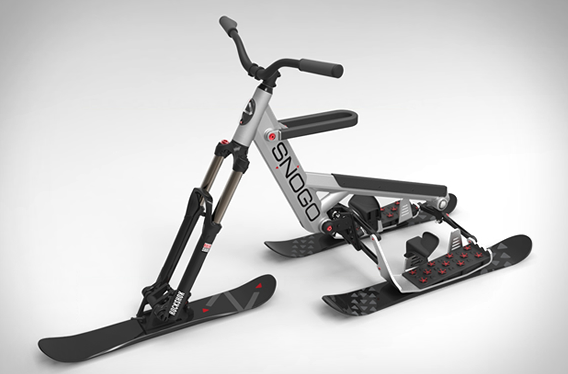 The sport of downhill skiing hasn’t changed much since it was first invented in 1840. Two poles and two skis seem to do the trick, and once you learn, avid skiers claim it’s just like riding a bicycle.

SNOGO, wanting to change the traditional method of speeding down the mountain, invented the SNOGO Ski Bike.

The concept of a ski bike isn’t new by any means; there have been many companies that have attempted to build a bike which would add a fun spin on the sport. The team at SNOGO looked at these pre-existing bikes and realized that none of them took into consideration comfort or functionality for the rider.

With a new concept in mind, the team hit the ground running and came up with a new style that would address the issues current bikes on the market were lacking. Developing what they call SLAT (Synchronized Lateral Articulating Technology) the SNOGO designers invented a three-ski model of their bike that would make for a smoother, more stable ride and allow the rider to feel a better sense of control while hitting faster speeds.

The SNOGO team didn’t invent a totally new concept, but they did invent something that would make a product better. At Davison, we call this Inventegration™ – the process of adding innovations to a product while the concept still remains the same.

A new invention doesn’t have to be something entirely new; it can just add a unique, new and exciting spin to a preexisting design.