With the latest announcement from Apple, Siri may soon be riding shotgun in your car .

Apple recently announced its latest product, CarPlay. This slick, Siri-enabled device will interact with your iPhone in the car. The latest invention isn’t a standalone in-car operating system; rather, it’s a “second screen” iOS interface that is optimized for the car. 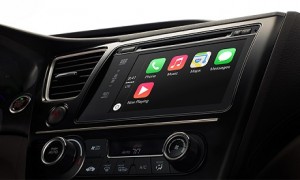 CarPlay will allow for a deeper integration with iOS devices than any in-car system to date.

The system will make its debut at the Geneva International Motor Show and cars like Ferrari, Mercedes, and Volvo will be shown with CarPlay built in.

Now, in order for CarPlay to work, the system operates with a Lightning-connector that connects to the iPhone. Users are limited to using the system with the iPhone 5, 5s and 5c, which all need to be connected to the car in order for the features to work.

But, nonetheless, you can think of this system as a car-infotainment system by substitution, because everything still runs through the iPhone.

CarPlay uses a system based on streaming H.264 video in order for the screen mirroring and car-touchscreen interaction with the phone to work.

The physical connection of the iPhone to the device will be tethered via a Lightning cable, which is a proprietary computer and power connector that was invented by Apple in order to find a better way to connect Apple mobile devices like iPads, iPhones and iPods to host computers, cameras, external monitors, USB battery chargers and other devices.

The new system was designed with the idea of providing ease for users to gain access and use their iPhone’s services and software via Siri. CarPlay offers access to hands-free calling functions, in addition to Siri search, messages and maps. The latter of the features means that Apple will have the opportunity to push its own maps app over those of its competitors (cough, cough, Google).

Finally, CarPlay will work in conjunction with other apps like Podcasts and some music services from third-parties like Beats Radio, iHeart Radio, Spotify and Stitcher. Based off of what we have seen so far, many believe that the evolution of this new Apple invention will be a gradual, hand-selected roll-out, which is similar to how Apple handled adding Apple TV software partners.

Check out a demo of the Apple CarPlay in action!