Reaching Out at the Future 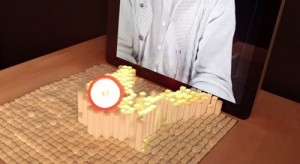 Could you imagine a screen that would allow you to reach out and touch something on the other side? Well, think no further; scientists at the Massachusetts Institute of Technology (MIT) have evidently invented a prototype of a screen that will allow users to virtually reach out and touch things on the other side. The MIT Media Lab’s Tangible Media Group unveiled the invention and dubbed it the “inFORM.”

The inFORM is equipped with a screen that utilizes a Dynamic Shape Display and turns 3D data from the user into real time physical representations, all from a remote location.

The grid that is used in this prototype is powered by an elaborate system of computer-controlled linkages and actuators that are located under the table. Additionally, there is an overhead Kinect and projector that delivers data on user motion into the system while casting visual feedback onto the table.

This invention could change the way that people work, due to the fact that the person on the other end of the video conference will have a strong sense of presence and the ability to have a physical interaction, while not actually being in the room.

Here is a video that should give you a better understanding of how this invention works:

Although there hasn’t been any word of when this invention will be available for use by Americans all over the country, we are definitely looking forward to the day in which this invention finds its way to homes everywhere.

To hopefully speed up the process of actually selling this product to people, researchers continue to work on the inFORM to increase the resolution of the device, and to try and make the device more portable, which would allow people with technical knowledge to work around the world and still leave their mark.

Only time and technology will tell when this interactive invention will hit the market, but we definitely are looking forward to seeing what happens next!