Whether you are jotting down notes, filling out a form, writing out checks or anything and everything in between, you are more than likely using a pen to carry out these tasks.

Although they might seem like mundane everyday duties, they wouldn’t be possible without the invention idea of Lewis Waterman, who patented the first practical fountain pen in 1884. 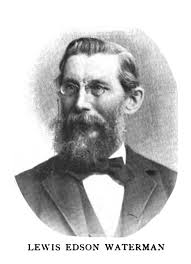 Writing instruments that were designed to carry their own supply of ink had been in existence, in principle, for over one hundred years prior to Waterman’s patent. In fact, the oldest known fountain pen dates back to 1702 and another inventor by the name of Peregrin Williamson, a shoemaker from Baltimore, received the first American Patent for a pen in 1809. These early invention designs had their flaws, which included ink spills and many other failures that illuminated their impracticality and made them hard to sell.

Prior to the fountain pen, for thousands of years, any form of writing was done by way of a quill pen. Some of the early inventors observed the apparent natural ink reserve that was found in the hollow channel of the bird’s feather. From their observations, they tried to replicate and produce a similar effect with a man-made pen that would hold more ink and would no longer require constantly dipping into the ink well.

But, as well all know now, a feather is, in fact, not a pen. So, someone had to come up with a better way to write. The story goes that Lewis Waterman, who at the time was an insurance salesman, had an appointment with an important prospect. As he was making his way to the meeting, he decided to buy a new fountain pen that had just come onto the market. This is where the blot, oops, we mean the plot thickens! Waterman was in the process of sealing the deal when he handed the prospect his new pen to sign his name. However, all the pen would do was blot, which means, no signature, no policy.

Though this may sound like nothing more than just an over-dramatized story, the fact still remains that Waterman discovered the fundamental problem to the already existing invention.  With the help of his brother, Elijah, they handmade their first fountain pen and used it until a customer persistently asked to buy it. The first sale of the fountain pen forced Waterman into making another pen for himself, after which he began a business of making and selling fountain pens.

As National Inventors Month is slowly, but surely, coming to an end, Lewis Waterman is a true testament to the fact that inventions can come in all shapes and sizes and out of varying circumstances. In his case, although it might be a dramatized story, Waterman needed a pen to seal his business deals; so, he took it upon himself to invent a better way to write through his invention of the fountain pen.

To this day, more than 130 years since this invention discovery, Waterman fountain pens are still being sold! We can only wonder if Lewis Waterman ever had an “ink”ling that his invention would become such a hit!