“Painting” the Way for Future Innovation

Today, as many of us file our tax returns, we can pause to remember an inventor who was born 559 years ago today — and who was way ahead of his time.

Everyone knows Leonardo Da Vinci was an amazing painter (the Mona Lisa, the Last Supper), but did you know he was an innovator as well? He invented some objects that are commonly used today, such as the scissors, calculator, odometer, helicopter, crossbow and armored car— to name a few.

All of his inventions began as drawings in a journal that he never let out of his sight (Mr. D has something similar). Other people attempted to build some of the inventions from his drawings, but usually with no success. Modern scientists feel that his ideas were far too advanced for anyone of that time to comprehend. Most of Da Vinci’s scientific studies were largely ignored due to his lack of any formal education. Scholars of his day believed his ideas were costly and would most likely fail. 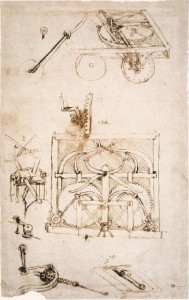 In 1502, he designed a 720-foot single span bridge as part of a civil engineering project for Sultan Beyazid II. The Sultan didn’t attempt to build the bridge, because he believed it was impossible. Leonardo’s vision was brought back to life in 2001 when a smaller bridge based on his design was created in Norway. In 2006, the Turkish government decided to construct Leonardo’s bridge to span the Golden Horn, a river that divides the city of Istanbul.

Most people knew that Leonardo was not the average man, but his works were still viewed as impractical, unrealistic, and out of reach. If he had listened to all the criticism and given up, many of the inventions we use every day may have never come to fruition.

Da Vinci is a true testament to believing in yourself and doing what you love. Happy 559th Birthday to a Remarkable Inventor!