Selection Sunday has come and gone and March Madness is officially underway. Now that college basketball teams were given their respective starting lines on the road to the coveted NCAA championship, we wanted to take a look at some of the inventions that make the game of college basketball what we know today!

A few months ago, we talked about the invention of the game of basketball and how its history has led us to where we are today. Now, we want to take a closer look at the intricacies of the sport that keep fans coming back for more each and every game.

As March Madness is gearing up, let’s take a look at some of the inventions that shaped the game of college basketball.

Shot clock- This invention puts a time limit on how long a team can hold the ball on offense. In order to keep the tempo of the game steady and in the hopes of having a higher scoring game, the 35-second shot clock was established. In the 1985-86 season, the NCAA instituted a 45-second shot clock. However, the clock instilled fear among coaches that it would be harder for the underdogs to stay in the game since they couldn’t control the clock when they had the ball. It turned out that the change didn’t dramatically affect the way the games were played, because 45 seconds was plenty of time for teams to execute their plans. As we always say, just like any invention, the invention of the shot clock went through a couple of tweaks until a better way to make it work was found. These tweaks happened in the 1991-92 season when the shot clock was reset, only when the ball hit the rim. Until that time, it was reset only when the ball left the shooter’s hands. But, the biggest tweak came in the 1993-94 season when the shot clock was reduced from 45 seconds to 35 seconds. 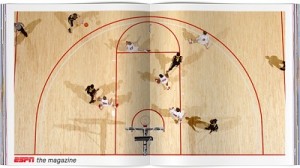 It all began in the 1980-81 season when the Southern Conference began experimenting with the three-point line. By the 1986-87 season, a 19-foot, nine-inch arc was established; and, again in the 2008-09 season, the arc was extended to 20 feet, nine inches. Like most changes to the game of basketball, the newest rule was not universally embraced by coaches, but it couldn’t be ignored; thus it made an immediate impact on the game.

Basketball- A man by the name of A.G. Spalding was approached by James Naismith, the inventor of the game of basketball, to produce a ball specifically designed for the new game. Mr. Spalding then went on to develop a basketball design, which has stayed relatively the same throughout the century, except for some minor changes. The invention that Spalding developed included an inner rubber air bladder that was surrounded by leather panels, which were stitched together. The addition of a cloth liner offered extra strength and uniformity for the basketball. Now, today’s basketballs are constructed, for the most part, in the same way with the inner bladder surrounded by either traditional leather or synthetic composite material.

Now that your favorite college basketball team has received its ‘March’ing orders, these three basketball inventions will be put to use in the next few weeks to help determine who will be crowned the kings of the NCAA!