Some scientists and inventors are household names—such as Edison and Graham Bell.  However, there are plenty of brilliant inventors that are not well known, despite developing critical things we use every day. Wallace Hume Carothers is such a man. Carothers was a brilliant inventor and scholar who held more than fifty patents. He is considered to be the father of the science of man-made polymers and is the man behind the invention of nylon and neoprene. So, let’s find out a little bit more about him. 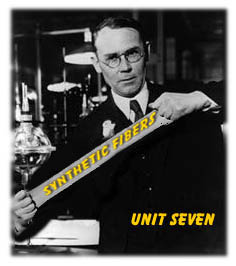 Carothers was born on April 27, 1896 in Iowa, and showed an early fascination with mechanical devices. When he began his college life in 1915, he got involved in chemistry when the head of the department saw how bright he was. In fact, Carothers excelled so well in chemistry that, before graduation, he was made a chemistry instructor and then promoted to head of the chemistry department. He proceeded to the University of Illinois, where he earned both a Master’s degree and PhD before becoming a professor at Harvard in 1924.

As a young instructor at Harvard, he focused his research in polymers. As luck would have it, the DuPont chemical company was also interested in polymer research and opened a research laboratory for the development of artificial materials. They heard about Carothers, who had just won a prestigious chemist award, and recruited him for the fundamental research program they were organizing. His first assignment was to investigate the chemistry of an acetylene polymer that might lead to a synthetic rubber. At the time, no one knew anything about polymer molecules, so Carothers’ team was really breaking new ground.

In 1930, Carothers’s team invented a new product called “neoprene”, which was chemically similar to natural rubber, but superior in many ways. It became the first commercially successful specialty rubber, and was a big success for both DuPont and Carothers’ team. But, Carothers was just getting started. The research team then turned their efforts towards a synthetic fiber that could replace silk. Japan was the United States’ main source of silk, and as war clouds gathered between the two countries, DuPont saw a need for a synthetic silk and gave Carothers the job of discovering a substitute. 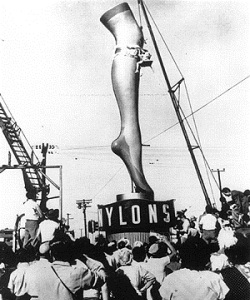 The early compounds were problematic: they melted easily and dissolved in dry-cleaning solvents. After many failed attempts, Carothers had an epiphany and scrapped everything they were doing in favor of using amines rather than glycols to produce polyamides rather than polyesters, which Carothers saw as more stable than the polyesters they had been producing. Sure enough, the new avenue of research paid off, and soon the team created an exceptional polyamide fiber, which they dubbed “nylon.”

Nylon became the first synthetic polymer fiber to be produced commercially, and it revolutionized the textile industry. DuPont introduced “Nylon, the miracle fiber” to the world with a giant display of nylon stockings at the 1939 World’s Fair in New York City. With the onset of World War II, nylon was used to make parachutes and other things, and as the GIs came home, sales to civilian consumers skyrocketed. Unfortunately, Wallace Carothers died soon after he invented nylon, so he never got to see what a tremendous worldwide success his work produced. But we know, and now we also know a little more about this brilliant inventor.