This week, May 22, to be exact, is the anniversary of The Wright Brothers receiving their first patent for a ‘flying machine’— the world’s first flyable airplane—that made its historic flight a hundred and seven years ago. So we thought it was a good time to take a look at the Wright brothers and learn a little more about these two remarkable men. 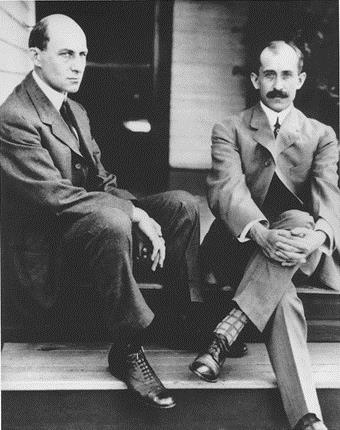 Orville and Wilbur Wright were born right after the Civil War: Wilbur in 1867 and Orville in 1871. As youngsters, the boys were encouraged by their parents to be mechanical and to think outside the box.  Their father Milton was a Church bishop who often traveled between parishes and would bring the boys various souvenirs and trinkets he found during his travels. As the story goes, one day he brought home a toy ‘helicopter.’ The device was made of paper, bamboo and cork with a rubber band to twirl its rotor. The boys were so excited they played with it until it broke, so they built their own. In later years, they pointed to their experience with the toy as the initial spark, that ignited their interest in flying.

In 1889, Orville got the idea to start a printing business and, with Wilbur’s help, he designed and built a printing press out of spare parts they acquired. They printed odd jobs as well as their own newspaper.  By 1892, the brothers began repairing bicycles for friends and started their own repair business. They opened a bicycle shop in 1893, and three years later, began making their own bicycles.

Around 1899, Wilbur read about a famous German glider pilot, Otto Lilienthal, who died while flying one of his own gliders, and this rekindled his early thoughts of flying. He requested information about flight experiments from the Smithsonian Institution and within a few months, had read all he could about flying. Wilbur also spent a lot of time observing birds in flight and noticed that they changed the shape of their wings to turn and maneuver. He thought that he could mimic this technique to obtain roll control by warping, or changing the shape, of a portion of the wing.

Based on these observations and studies, the Wrights determined that three things were needed to create a flying machine: wings to provide lift, a power source for propulsion, and a system of control, which they defined in three axes of motion: pitch, roll, and yaw. They brain-stormed how to achieve the same effect that birds used with man-made wings and eventually invented a way to arch the wingtips slightly to control the aircraft’s rolling motion and balance. As they later recounted, Wilbur came up with an ingenious system of slightly warping the surface of each wing to change its position in relation to oncoming wind by twisting an empty bicycle inner-tube box. The brothers tested their theory using a small kite and it worked.

Over the next three years, they designed a series of gliders which would be flown in both unmanned and piloted flights. In 1900, they moved to Kitty Hawk, North Carolina because of its wind, sand, hilly terrain and remote location.  After a major failure, they built a wind tunnel to test a variety of wing shapes and their effect on lift. Based upon these tests, they had a greater understanding of how a wing works and could calculate with greater accuracy how well a particular wing design would fly. 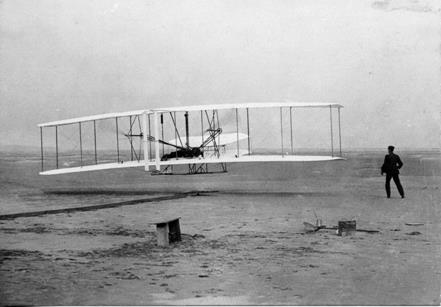 During 1902, the brothers designed and flew a glider with a 32-foot wingspan and a tail for stabilization.  With successful glides to validate their wind tunnel tests, the Wright Brothers designed a motor and a new aircraft sturdy enough to accommodate the motor’s weight and vibrations. The craft weighed 700 pounds and came to be known as the Flyer.  After two attempts to fly this machine, Orville Wright took the Flyer for a 12-second, sustained flight on December 17, 1903 and history was made.