As we enter into June and have the entire summer before us, we tend to daydream of beaches, picnics, and the one drink we associate with cooling us off on a hot summers day—an ice cold Coca Cola.  We all know Coca Cola, or Coke as we all call it today, as the quintessential American thirst quencher. But did you know that Coke was originally intended as a health tonic? It was first introduced in the 1870s by John Pemberton, a chemist and pharmacist who lived in Atlanta, Georgia. And back on June 6th, 1887, Coca-Cola was trademark registered. So to celebrate the 126th anniversary of this event, let’s find out more about this wonderful drink and the man who invented it. 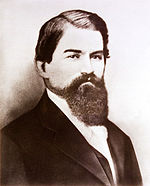 John Stith Pemberton was born in Knoxville, Georgia on July 8, 1831.  Though not much is known about his early life, we do know that he studied chemistry and became a pharmacist in the Knoxville area.  When the civil war broke out, Pemberton enlisted and became a Colonel of the Confederate Army and was badly wounded in 1865 when he was slashed across his chest by an enemy sword. During his recovery he, like many wounded veterans of the war, became addicted to the morphine he used to ease the pain.

Being a pharmacist, he sought a cure to counteract this addiction and began experimenting with a drink called coca wine—wine mixed with cocaine extract—that was popular in France at the time.  He eventually created his own version of coca wine, but one that contained kola nuts and damiana, a chamomile-like shrub which was used by South America Indians for its relaxing effects. He called his concoction Pemberton’s French Wine Coca and advertised it as being:

“Particularly beneficial for ladies, and all those whose sedentary employment causes nervous prostration, irregularities of the stomach, bowels and kidneys, who require a nerve tonic and a pure, delightful diffusible stimulant”

It was a very successful potion and sold very well, but in 1886, the state of Georgia enacted temperance legislation which forced Pemberton to produce a non-alcoholic 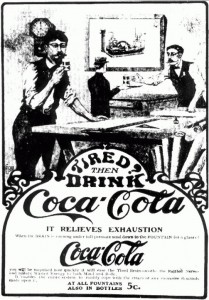 alternative to his French Wine Coca. He teamed up with an Atlanta druggist named Willis Venable to help him perfect the recipe for a new non-alcoholic beverage. They experimented with scores of formulas by trial and error to create the base syrup that they mixed in water, but the story goes that they created Coke by ‘accidentally’ mixing the base syrup with carbonated water. The fizzy drink tasted remarkably delicious and Pemberton decided then to sell it as a fountain drink rather than a medicine.

Though they sold it as a fountain drink, Pemberton still made many health claims for his product, touting it as a ‘valuable brain tonic’ that would cure headaches, relieve exhaustion and calm nerves, and marketed it as ‘delicious, refreshing, pure joy, exhilarating,’ and ‘invigorating.’ But he knew he wasn’t an advertiser so he hired advertising man Frank Robinson for help in this area. Robison created the name ‘Coca-Cola,’ which quite clearly incorporates the two main ingredients – coca and kola nut extract. Robison also registered Coca-Cola’s formula with the patent office, designed and trademarked the logo and distinct script.

In 1887, with his health failing, Pemberton sold portions of his business to various parties, with the majority of the interest sold to businessman Asa Candler, who owned a chain of drug stores in Atlanta. Unfortunately, John Pemberton died less than a year later, in 1888, and never got to see the global megabrand that Coke became over the next century. But on those hot summer days, when we grab for an ice cold Coke to quench our thirst, we’ll know who to thank for that refreshing drink: John Pemberton. 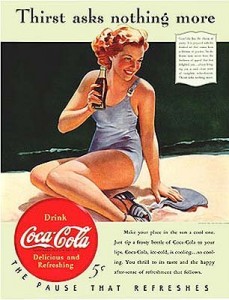