Eadweard Muybridge was a brilliant and eccentric English photographer who used photography to study motion, and gained worldwide fame photographing animal and human movements imperceptible to the human eye. Born in Kingston, England in 1830, he immigrated to the United States during the “49er” gold rush in California, where he worked as a publisher’s agent for the London Printing and Publishing Company. He traveled back to England at one point and there learned photography, and by the time he returned to San Francisco in 1867, he was a professional photographer. With his highly proficient technical skills and an artist’s eye; he soon gained notoriety with his large photographs of Yosemite Valley, California; pre-dating Ansel Adams’ famous photographs of the park by over 50 years. 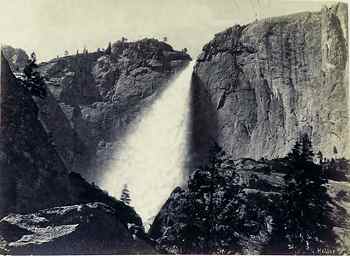 But what really makes Muybridge remarkable is his pioneering work on capturing motion with still-photograph cameras. This started when, in 1872, the former governor of California Leland Stanford hired Muybridge for some photographic studies. There was a lot of debate among the elite horse owners of the time whether or not all four feet of a horse were ever off the ground at the same time while running. Since the human eye was not fast enough to perceive the action of the horse’s legs, Stanford hired Muybridge to photograph a horse running to see if he could capture its movement.

Muybridge began experimenting with an array of cameras photographing a galloping horse in a sequence of shots. His initial efforts did show that the horse’s legs were all off the ground for a micro second, but he knew he could do better and spent the next few years perfecting his stop-motion photography. In 1878 he created a “movie” called The Horse in Motion, which feature Stanford’s thoroughbred Sallie Gardner running at a track in Palo Alto, CA. To achieve this, he placed numerous large glass-plate cameras in a line along the edge of the track; the shutter of each was triggered by a thin string as the horse galloped passed. He copied the images in the form of silhouettes onto a disc to be viewed in a machine he invented, called a zoopraxiscope, which projected a series of images in successive phases of movement. Voila, the “motion picture” was born. 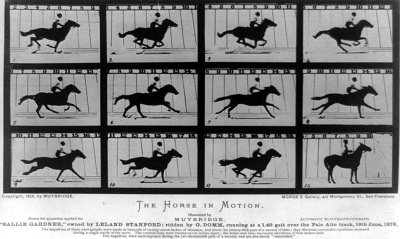 By 1880, Muybridge moved East and began work at the University of Pennsylvania, producing thousands of photographs of humans and animals in motion. He photographed animals from the Philadelphia Zoo to study their movement, and also used sets of cameras to photograph people in a studio against a measured grid background in a variety of action sequences, including walking up or down stairs, dancing, carrying buckets of water, or doing gymnastics. 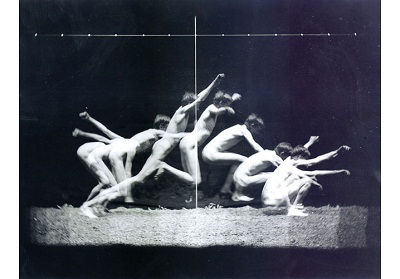 In many of his “films,” his models were either nude or very lightly clothed. This was done for scientific and artistic reasons; as he put it, to improve how we understand the mechanics of human motion. He is credited with filming the first kiss ever recorded in motion. Surprisingly, he is said to have chosen to photograph the kiss with two women because, in the context of Victorian culture, this was more likely to be seen as innocent. For this reason, many of Muybridge’s photos showing interactions between what might be expected to be men and women use women for both roles.

Muybridge died in 1904, spending the remaining years of his life publishing books featuring his motion photographs and touring both Europe and North America, presenting his photographic “movies.” At one point, he had a visit with Thomas Edison, and though we can’t say for sure, Muybridge possibly inspired Edison with his phenomenal motion pictures to go on and invent the movie camera. So maybe we should call them the “Father and Step-Father of the motion picture.”